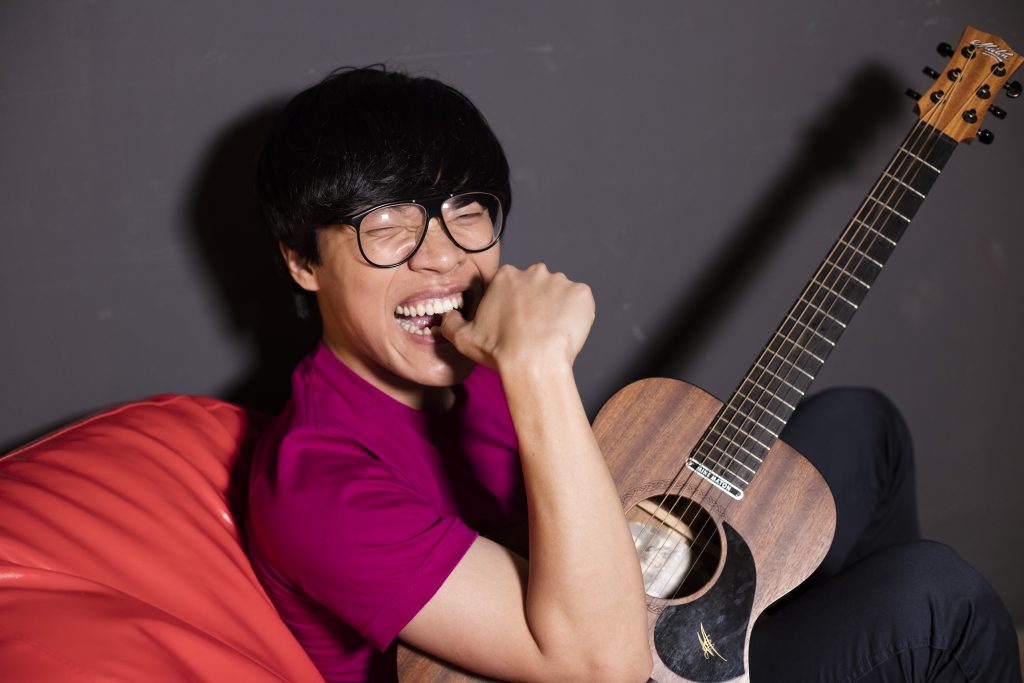 Interviewing Crowd Lu:Life doesn’t need to be lived too inspirationally

Crowd Lu’s changed. Not just in terms of his image, he no longer persists in wearing short shorts, and has taken back that signature smile. Even his new songs do not just have a pure sense of happiness; the way he sings and the tools he uses to create have become noticeably introverted. He laughed, say: “It’s because in the past my happiness was too over the top, now I just want to go back to that middle point. If looking back at that Crowd Lu now, I would feel that he’s quite annoying, perhaps he’s crazy.” He makes fun of himself, saying he is a person with weak personality. In the past in order to let go of negative feelings he would often find ways to let himself become a very happy person. “But afterwards I realised that embracing my own darker side is also one source of happiness.” Crowd sighed and continued talking, saying that after he got out of the army in 2014, he began to feel anxious again. At the time, he was like a bird that was just freed from its cage who had lost all sense of direction. “Actually when preparing this album, I spent a lot of time organising my own difficulties, so the new songs more or less touch upon a big sense of loss, I am unendingly thinking about what other kinds of works I can write, what kind of person I want to become.”

So did he find himself? Looking back, it has been three years since his last album “Pop songs with a guitar”. From focusing on his guitar to create pop songs till his recent debut “What a Folk!!!!!!” it has completely changed into an unplugged three-piece arrangement (guitar, bass, drum) which forms the foundation of this folksy album. The changes that have occurred on this journey actually are the fruits of Crowd’s constant battle with his inner demons. “A few years ago, Little Tiger (Tiger Zhong) suggested that I go and listen to British Folk singer Nick Drake’s 1972 album “Pink Moon”. That was an album where every song used only a guitar for arrangement; only occasionally several songs would have a bit of piano melody, to me after listening to the whole album I was really shocked, as I didn’t know that folk could be so awesome. At the time no matter if I was at home, walking on the road, or vacationing I would be repeatedly listening to this album, which made me think that I also wanted to create an album with a very strong sense of accompaniment.” Crowd expresses that prior to interacting with “Pink Moon”, his thoughts on “Folk” was just using an acoustic guitar to sing about life, however real “Folk” is actually turning life thoroughly into a song, and can actually be heard as Blues or Rock music. The important part is that it needs to hold onto the authentic taste of the song and present that clearly.

“I think this is the responsibility of the songwriter, they should-more so than others- eliminate the possibilities of not understanding themselves; no matter if bawling or laughing, one should take the chance to hold on to the feelings that pass over temporally, so that we can truly face ourselves. I really feel that after modern people have gotten their smartphones, they have continually been missing out on themselves. When you are looking at your phone, there’s a possibility you are missing out on the sunset, and could also have missed out on an opportunity to meet a girl, it’s quite a shame.” So because of this, he wrote “Phone Geek (2)” to remind everyone to not be too involved with their phones. Although the song still has a mainstream kind of humour, it also uses a strong Acoustic Punk genre to really go all out to show Lu’s strong feelings on this topic.

If one observes closely, they will find that the new album has a majority of lyrics which Crowd co-wrote with others. Curious as to what kinds of challenges or obstacles Crowd faced in completing them by himself, I dug further. Crowd straightforwardly said that this time it was more like a feeling of team creation. For example, “Phone Geek (1)”’s first two sentences were actually thought of by a colleague at the record company before the melody was even put together. Afterwards during a discussion Ocean Man and Cheer Chen also added a section to the lyrics, allowing it to become the song it is today. Not only speaking of the humorous yet convenient method of communication, it seems that the real time lovers spend meeting has been gradually replaced by mobile phones. At the same time the song has cleverly integrated the lyricists’ collective nostalgic memories, greatly increasing the attractive power of the song.

And Crowd at the time was also trying to find a way out for his difficulties, and thus for the first time worked with lyricist Yao Ruo Long on the song “A floor and a half” expressing his helplessness at being trapped in Taipei with nowhere to go. Perhaps this is him being homesick. Born and raised in Tainan and afterwards uprooting himself to pursue music; a while back he walked all the way back to his hometown and I asked whether he missed home. “Honestly speaking, the time that I have spent in Taipei is almost matching up to the time that I have spent in Tainan in the past, but at the moment this place still gives me a feeling of fighting. Sometimes I miss home, and really wish to meld this island together, that way Tainan and Taipei will be together, and I will have the feeling of being home.” Although his eyes unconsciously belie a soft kind of sadness, but he is very grateful for the nutrition that Taipei has given him. “If I didn’t realize that Taipei people don’t eat breakfast, I wouldn't have written ‘Good Morning beautiful morning’!’”. After saying this, his vibrant smile washed away the seriousness that had been present just a second before.

At this point in the interview, Crowd had finally let his guard down; perhaps it was because he began to talk about his most beloved guitar, or perhaps it was because he had already put down that heavy stone in his heart. Talking about his new album “What a Folk!!!!!!” he used eight different types of guitars to record his songs. Once Crowd started talking, he couldn’t stop.

When confirming that the album could only play within one genre, it became a “game of limits”. Other than starting to analyse the singers he appreciated anew such as Prince, Steve Rodgers and learning their singing methods, Crowd also used different types of percussion instruments such as ladles 捲尺, clicking, spoons and other tools to increase the dynamism of the sound. And in selecting the guitars based on their timbres and personalities, this was yet another important lesson.

He gave an example, “Moonlight Forgot to be Recording” was recorded using Crowd’s first baby taylor guitar. Because this guitar’s sound was more easily eaten up by the band Sound, this has been the first time after many years in the business that this guitar has been used, making it even more meaningful. On top of this, this was also the first time interacting with the 12-string, Nylon strings and Mandolin guitar types . In “Can Cancer’s Star Sign love story continue to speak of love” the 12-string guitar created the natural-sounding chorus, while the Nylon stringed guitar was a representation of gentleness with its low, wide timbre. In “Summer song”, the use o the Mandolin created a full sound too. Lu bluntly said: “After beginning to record, everything was pretty fun, just like being with the guitar club in university, I was able to play the same song with tens of people, that kind of connection between people and music is really great.” How to naturally interact with these was one of the goals that Crowd had set for himself in this next period. For this recording, he put together his first ever band called “Nerd Punk”, and because of his experience as a social worker working with homeless people he wrote “Tonight this is where we sleep”. “But in finishing this song that’s when I realized actually the main character of this story is still me, I am quite a selfish person, so the attention will always be put on myself, but going on like this will cause the days to be painful, especially when I am sad I will just be even sadder. If one can break off a piece of your heart and use it to care about those around you, then you can reduce your own pain. For example, I began to look after the homeless, this action then allowed me to solve my own problem, this was something that I had only come to realize suddenly during the process of this album.”

“Previously I would always compose by myself, live by myself, but recently my sister also moved to Taipei to stay with me, with a band one also has to interact and compromise, now I need to learn how to leave loneliness and enter the crowd. In the next stage of myself, I want to make more friends, because since stepping into the entertainment circle, I’ve become too used to being alone.” Just like the moving autograph and selfie session Crowd recently held on the streets, Lu’s really done what he said he would, using a real event to embrace the crowds.

From when he released his first single “Deep brightness” until today, Lu’s walked on this singing path for a decade. Going into his thirties Crowd has certainly changed, I am not sure whether this counts as a kind of growth, but when conversing with him, I was able to understand that actually one does not need to force oneself to become a person that is forever happy. Life is bittersweet, and does not need to be too inspirational. And Lu, having experienced many types of internal and external scourings can finally face routine-good or bad- with an easygoing attitude.

Postscript: Which genres of music can you not stand?

Crowd Lu loves the acoustic guitar, his creativity and inspiration comes from life; be it eating breakfast, observing the passerbys or even a mosquito. Any little thing can be turned into a song full of humour. “Folk” has more or less become his most endorsed phrase, and it continually piques people’s curiosity, what kind of music can Crowd really not stand? Crowd nods his head saying: “Actually I found I actually like things which have more emphasis on the melody, comparing with music that has a hook, like experimental EDM, it only has beats. I have no way of following along and repeating, I feel very nervous.”