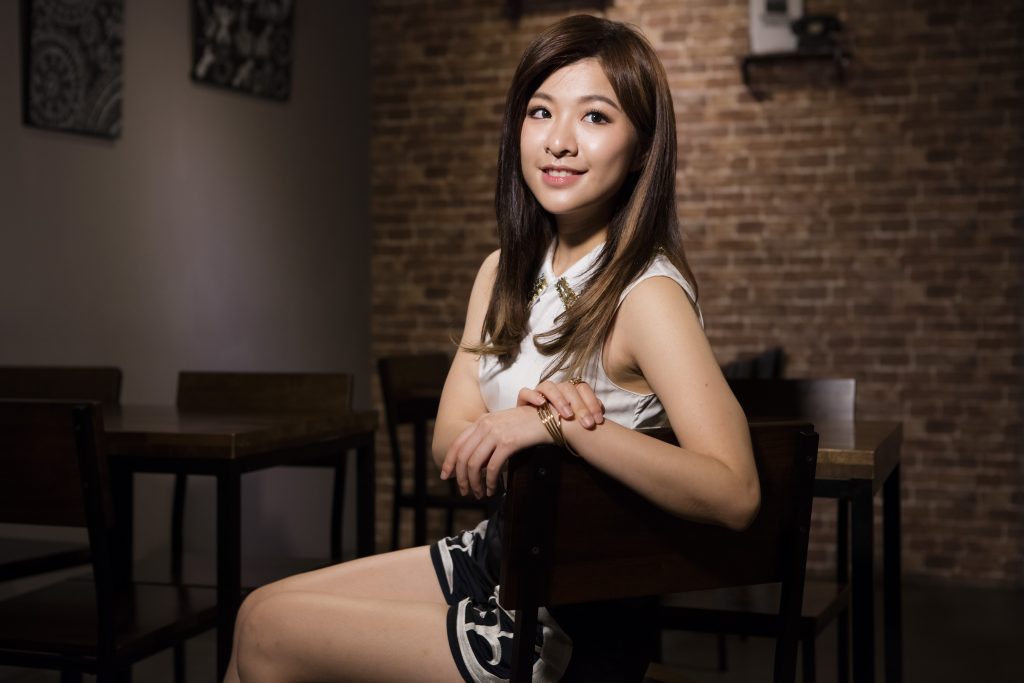 Interview with Sharon Kwan: Initially I only knew how to sing my songs right

Right after stepping through the door, the café was filled with popular Western tracks, like Taylor Swift’s “I Knew You Were Trouble”, or Ellie Goulding’s “Love Me Like You Do”. Sharon Kwan (Little Kwan) sat as she prepared to be interviewed, humming naturally along with the background music. Those who love to sing cannot be restrained no matter where they go. Learning to perform on Super Star Avenue, learning music on Voice of China

Coming out from reality show “Super Star Avenue”, Sharon Kwan released her debut album “Homegirl” in 2012. After four years, “Blossom 2.0” is Kwan’s new work that demonstrates her change after challenging the stage that was “The Voice of China”. She shared her motivations for deciding to re-enter the competition scene: “I registered for ‘The Voice’ because I wanted a new start, to regain my passion for music, and my confidence in myself.” In between her first and second albums, Sharon experienced a period of darkness; however it was “The Voice” which not only allowed her to slowly come out of her slump, but also allowed her to meet many new musically-inclined friends who she even wrote her first composition “Shh” with.

Before participating in “Super Star Avenue” and after participating in “The Voice of China”, two different singing competitions, they both gave Sharon different kinds of stage experience. She shares: “Me on ‘Super Star Avenue’, that was when I first started out, didn’t know anything, and tried a lot of different things so learned a lot in terms of performance. During ‘The Voice’, because there were a lot of very good friends there who were very musically talented, and also the four mentors, it was more about learning about how to play music, indulge in that feeling and not see work as a form of stress.” David Tao supportive till the end, Sharon changing as she matures

On the road to becoming a singer, Sharon debuted extremely early, at the age of 16 on “Super Star Avenue”, and taking out the champion spot. At the same time it was her mentor and boss David Tao who has been her important supporter. Speaking of Tao, Kwan says: “When everyone felt unsure whether I should continue or not, he would always be the one to very confidently say, ‘She needs to continue singing, she needs to continue releasing albums!’.

From 15, 16 she came to be acquainted with audiences. Now 20 this year, it has been a period of time. No matter through singing competitions or recording albums, it has shaped Kwan from being someone that ‘
Didn’t think of anything other than singing well’ to slowly becoming an artist who ‘knows what they wants, and what direction they should move in to learn’. And yet singing cover songs and my own songs are two different things. She said: “previously during competitions I would always sing other people’s songs, and might have tried to copy the original artist’s singing style, with less of my own unique qualities. Now I’m more like myself, and am more able to express myself.” Do right things, do things right

“My Weibo’s description is-Do right things, do things right. One day I saw this sentence and was move by it, because even if you try hard at doing certain things, perhaps if the direction is wrong, it’s a waste of efforts. I have quite strict expectations for myself, towards everything I must try my best to do it right, but I’ve found that sometimes I will be unable to differentiate my priorities, and waste a lot of effort on things that aren’t very necessary.”

On top of her maturing attitude, in the musical production side of things Kwan has also tried to composed her own songs, namely “Shh” and “GAMF”, triedher hand at rapping and also dance in her music videos. After concluding her experience at “The Voice of China”, her new album was successfully released, and Kwan once again gave herself some homework: “I hope that I can continue to have more compositions, although I don’t have a lot of foundation. But sometimes I like to play around with a little bit of arrangement, I hope in the future I will have an opportunity to include that in my own songs.”

Having strict expectations for herself and being experienced in singing competitions, Sharon analyses every single song’s pronunciation and singing style. So why don’t we just get her to hold a class via FB Live? Below is a simple organisation of what she shared with us in terms of the little things she takes note of when singing three songs from her latest album.

“Shh”: Electronic R&B, lightly singing will give it that ‘chill’ feel
The first time I tried to sing this song lightly, I wasn’t able to allow my real voice to come out completely, a lot of it uses falsetto to push it out, and one needs to sing it with a bit of groove.

“Heart Moved”: R&B paired with pronunciation
The pronunciation for this song I purposely made it more lax, so that it sounds a little more like English because its melody is more westernised. Chinese words have more of an ‘attack’ sound, and if you sing it properly the words will sound fuller and more complete, but I hope to sing this R&B song in a more drawn out manner it can fit better with the melody.

“GAMF”: Singing rap requires one to find their tone
When recording the demo, every sentence was recorded about 100 times! Because I feel like my voice is more sweet, and sounds cute, not cool enough, not bully enough. Like Nicki Minaj and Iggy, the way they talk and their voice is different from when they rap. When singing rap they have their own tone, so I have tried to flatten my voice a little, making it higher when I sing it, fining my own tone.