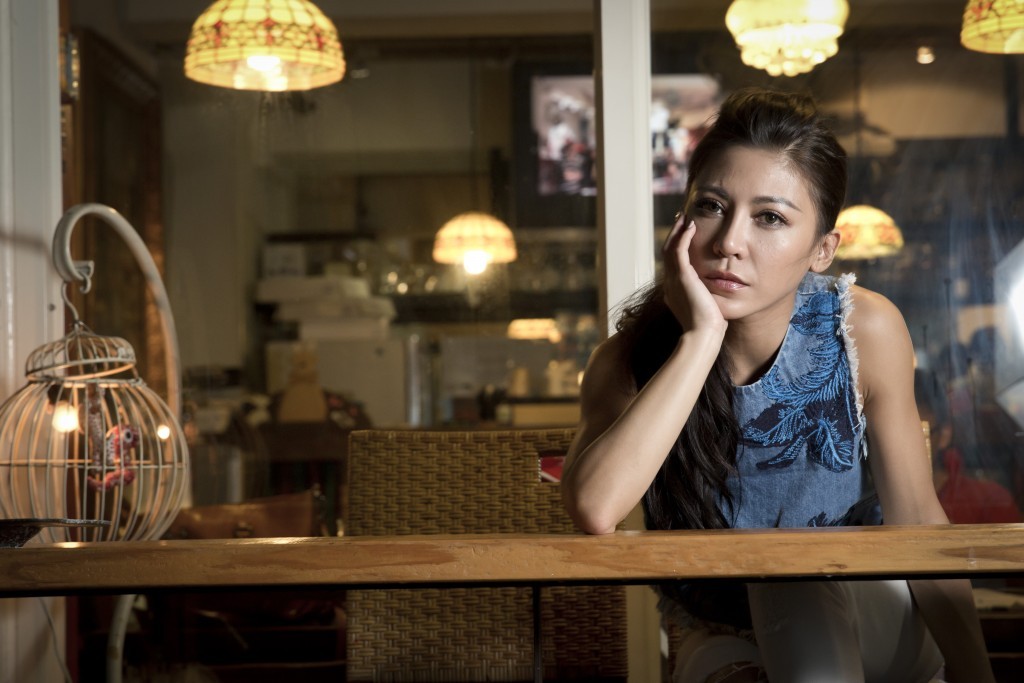 Interviewing Eve Ai：Being a singer-songwriter is too much pressure

In June this year, Eve Ai released her third album “Talk about Eve”, with new songs that have received praise from Rene Liu, HUSH and many others. Music Critic Ma Xin even announced of the album that “Taiwan has released yet another freewheeling singer who cannot be controlled by Marketing ploys”. This is a musical work which is almost entirely self-composed by Eve, with her writing the lyrics for 8 songs, and over a half of the songs. Instead of facing the label of ‘singer-songwriter’, Eve seems to be a little unused to such titles.

“Actually I have always categorized myself not as a singer-songwriter, that is the praise and support everyone has given me and I am very touched. But I just feel that every time I’m writing these songs, to me it’s a little like a diary, and I even laugh at myself as if I’m going through therapy. Because songwriting is simultaneously a way of reflecting on ones’ own ideas, I just purely have a lot of things to say.” Eve recalls that the motivation to write songs came to her just as a form of recording her thoughts without a goal in mind. Possibly the ideas that suddenly appear in her mind, or it could be the stories of good friends, or it could also be gossipy secrets of others that she had inadvertedly heard while walking on the streets. “I really like browsing at the markets, there are a lot of different types of people there, they are all really kind, really cute, every time I look at them I fee like life becomes just a little bit brighter. I will secretly observe each person’s living habits, for example the grandma buying vegetables, the guy buying mushrooms, they all have certain stories written on their faces. Sometimes even on the weekends where I don’t have much to do, as I don’t drink or go partying, I will go to ZhongXiao East road just to observe what the passerbys’ nightlives are like.”

She also began to try her hand at recording down her writings and giving it to her producer. But she did not think that the producer would be willing to let her try her hand at it, so her first album successfully contains her first public creative work “Metal Girl”. Afterwards, when releasing each album she would use the same method to put her body and soul in order, slowly piecing together a complete image of herself.

Eve expresses that she really needs to live life, and can’t force herself to sit down in front of a computer or piano to write something or other. Even when melodies appear to her through this method, she is also suspicious of their authenticity. Other than this, another thing that motivates Eve’s creativity is exercise. She animatedly says that exercise will allow your mind to go clear, allowing the paths of logic to be even more robust. “For example, the first single for this album “The Sum of Us” was hummed while I was riding a bicycle on a beautiful afternoon. I want to let music birth itself naturally, so it’s hard for me to give others dates for when I will finish a certain project, this is my biggest weakness.” She interestingly describes the inspirational moments before these creative works come to her as when one cannot find the socks for the opposite foot. Although it is currently missing, there will be a day when it will appear, so she is very happy to wait.

From 2015, Eve has been writing songs and lyrics for other artists including Amit (A-mei)’s “Whadd’ya want”, Rene Liu’s “Never get tired of looking at you”, Della Ding’s “Crossover” and other songs. Since her own creations for herself are so intimate, I was curious to know about her relationship with her creations for others. She replied: “If there’s a possibility, I would really like to invite the artist to talk things over for a day, trying as much as possible to understand them.”

“I like writing things which I personally feel very deeply, such as the song “Never get tired of looking at you” which I wrote the melody and lyrics for Rene, was because I observed that she is a person of many stories, so I tried to create the image of her conversing in the song.” Eve spoke surely of creative works as needing to come from the heart, and not being a piece of writing that was completed because someone asked for it. “Especially lyrics, to me these are even more important. I think that this is a message from people to people, if this thing didn’t really happen in my mind, I want to write it and give it to you as a present, and won’t force myself to try and create it.”

American singer Tori Amos who has been nominated eight times at the Grammy awards is Eve’s idol, and has eeply influenced her perspective in writing songs with her abstract yet jumpy logic of thinking. “‘Mental instability’ is a characteristic that I really like, I really like her music’s instability and narrative style which she summarises her ideas in, even if she is just lightly writing of a routine scenery, it can still tightly worm its way into your heart.”

And from her second album “Adult Love Song” she began working with producer George Chen, another key point who has influenced Eve. Eve says: “I think Teacher Chen is always able to take my ideas and piece them into a meticulous story, which yet always holds on to the initial idea of your piece of work.” Both of them are similar in that they have a background in theatre and are used to creating vivid imagery from their songs. Perhaps from a certain colour or a scene from a movie, they use communication methods which surpass words to discuss their thoughts.

She continued to share little anecdotes about her songwriting with “Bad Check” as an example. The inspiration for this came from Quentin Tarantino’s “From Dusk Till Dawn”, a story which summarises the story of a person stranded on the desert who chances upon some monsters. To Eve, the movie brings a lot of conflict but this is not all, when the main character escapes from the big city, it instead heralds a beautiful story of chasing after freedom. As a result, this song no matter in the lyrics or the arrangement is full of Western tastes. Paired with singer Ko Chi-Tang’s whistling, it signals a stunning and wide-reaching visual imagery. The lyrics sing of the world changing that may or may not be an accident, but Eve has early on already shown an ease with handling many different perspectives. Going back to the album “Talk about Eve”, one will notice that the styles are much different than before, with the meaning and musicality more warm and introverted, this is the attitude that Eve would like to share with her audience that reflects her current self: “In prior works I was more like a boxer, a survivor. I wanted to break through some stereotypes , furiously trying to prove the significance of my existence. But once you’ve tried furiously for too long, humans do get tired, and perhaps its because Summer is here, I wanted to go to the islands in the South to vacation already.” This type of tiredness caused her personality to have some significant changes after the end of her second album’s promotional period. Other than officially taking on vocal training, through practice she found the position of her voice and discovered even more possibilities to express myself. Today she still doesn't like to raise flags and make scenes, instead she now focuses on making positive breakthroughs, choosing to focus on accompanying every friend who has affirmed or believed in her. “When one has kept your armory away, I think that people become more easygoing. Just like the two of us easily having a conversation, this interview is full of warmth. This is an album which I’d like to sit down and discuss with everyone, and not just be watched while I wear luxurious clothes and talk to myself under the spotlight.”

She laughed, saying: “Even when Evan Yo, my high school classmate helped me produce this new song “Lean On”, he was speechless, asking me how I recently turned into this type of girl. (laughs).” And this song not only shows off her little woman side, but has also become one of Ai’s seldom heard cheerful musical works. One could say that from this song, listeners can really see the change in her personality in these 18 months. “I think it’s because as the songs that I’ve collected have increased in number, this has allowed me to be more willing to dig deeper into my internal thoughts and changes. I have honestly put these changes into my works, making them publicly available, because I am happy, I like my changed self.”

‘Freedom’ and ‘Love’ are two important messages in Eve’s latest album. She laughs, saying: “Actually you’ve said it all, it’s just like me decreasing the range of my world. I just want the people I love, trust and those who trust me to be together, that is enough. Just like the song ‘Escape Plan’, what it’s talking about is when there is only you and I in this world, whether you would dare to come with me. My love is a kind of very strong possession, for it I can let go of everything else and roam till the ends of the earth.”

So if one day the apocalypse comes, how would she prepare her ‘Escape Plan’?

“I’ve never planned this before, but I have thought about it. It’s a little like Wong Kar Wai’s film scenery, in a grey-toned concrete jungle, perhaps there are only several lights illuminating windows, and then I and the person I love are squeezed together in a dark corner. Looking into each other’s eyes, depending on each other…”

The Eve we know today has changed to become someone with a lot of things to say. “Talk about Eve” has officially allowed her to become a storyteller. Performing her own show, inviting every passerby to participate, listening to stories together. “Since my lyrics still write from a third person perspective, but I think its perhaps that I am a little timid, always watching everything from the sidelines. So these are not my sad stories, but others. But little did I realize, they’re still mine.” (laughs).”

At the end she also confessed that being a singer-songwriter is a lot of pressure, and she instead hopes that everyone can see her as one member on a joint list of creators, she requested this, if there are people who wish to enter into this idea, then we are on the same page. Even if the list isn’t very long, but as long as there is a song which can bring different people together, at least it proves that we are not alone, this is the reason for her becoming a singer.

“After this job is finished, I’m going running.” This interview was Eve’s last promotional event of the day. Although weary, Eve’s eyes are always sparkling with flames. Warm, small but very real. She knows what she wants, and yet is willing to change, with no plans, yet every step causes people to feel surprised. But in between changing and unchanging, she is always just herself.