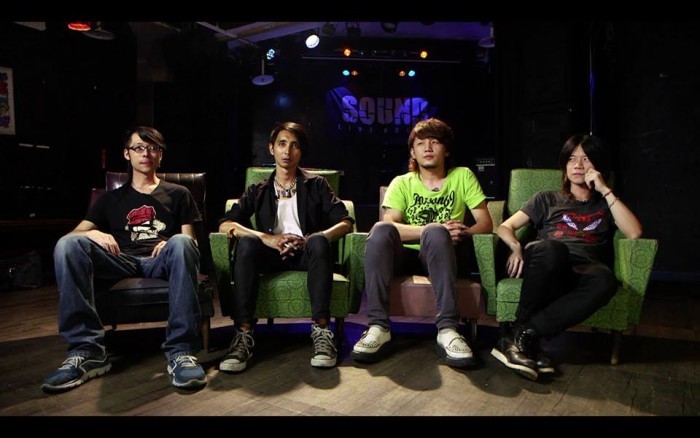 A Short Interview with SHOOTUP ／ An Outburst of Anarchy SHOOTUP is a punk rock band which uses their truthfulness to collide with reality.  Wei-Lan is not only the vocalist and the guitar player, but also the songwriter.  Together with Shi-Yuan, the bass player, the two of them formed the core group when the band was still in the initial stages.  Xiao-Feng the drummer and Lupin the guitar player joined them afterwards, bringing more complexity to their music.

◎How did you come up with the brand name “SHOOTUP”?

At the beginning, we’ve come up with lots of names.  Many of them are with the style of seventies and eighties, such as pistols and something like that, but we haven’t made our final decision yet.  Later on, one of our former members came up with the name SHOOTUP and we all agreed with it.

Shi-Yuan is the technician of aircraft manufacturer.  Xiao-Feng is a drum teacher.  Lupin is a coffee taster who has won the world championship.  Wei-Lan is a site superintendent at a building company.

◎What kind of thoughts or ideas do you wish to express through music?

We didn’t get to know the culture and thoughts behind punk until we started listening to it.  SHOOTUP intends to pursue anarchy.  Anarchy doesn’t mean chaos, but everyone takes good care of their own business.  Freedom is a kind of self-discipline when others are not affected by it.  We also hold the punk rock bands performance “ANARCHY IN TAIWAN” every year.

◎What’s the difference between Taiwanese and foreign audience?

Now many people only stand there and clap when they are watching the performance, but we think that clapping is just an embarrassing way to show that they’re bored.  When I went to some live performance of experienced punk bands, I saw that their audience would also move with the music, making lots of physical contact and create a really exciting atmosphere.

Foreign audience are more likely to come and chat or high five with us after the performance.  Throwing beer onto the stage?  That’s great!  We’re often pretty drunk before the performance…

But, there’s also an exception.  When we were performing in Tainan in May, there was a little girl at the front of the audience and she did dance really hard.  We were worried about her neck a little bit.  Ha ha!

Xiao-Feng：That’s because it’s hard for drummers to be visually attractive!  I’ve been complaining about this in our group chat, but no one cares about it at all.  I was at a stationery store on Halloween and I saw and bought lots of Halloween masks.  After comparing with other masks, I’ve decided to wear this golden orange one and it allows my skin to breathe as well.  Later on, I became more visually attractive because of this.  Ha!

I guess so.  Besides the rehearsing during weekdays, we perform every weekend as well.  This is what we want to do and it has nothing to do with our work.  These people are also really easy to get along with so it’s pretty cool to be with them.