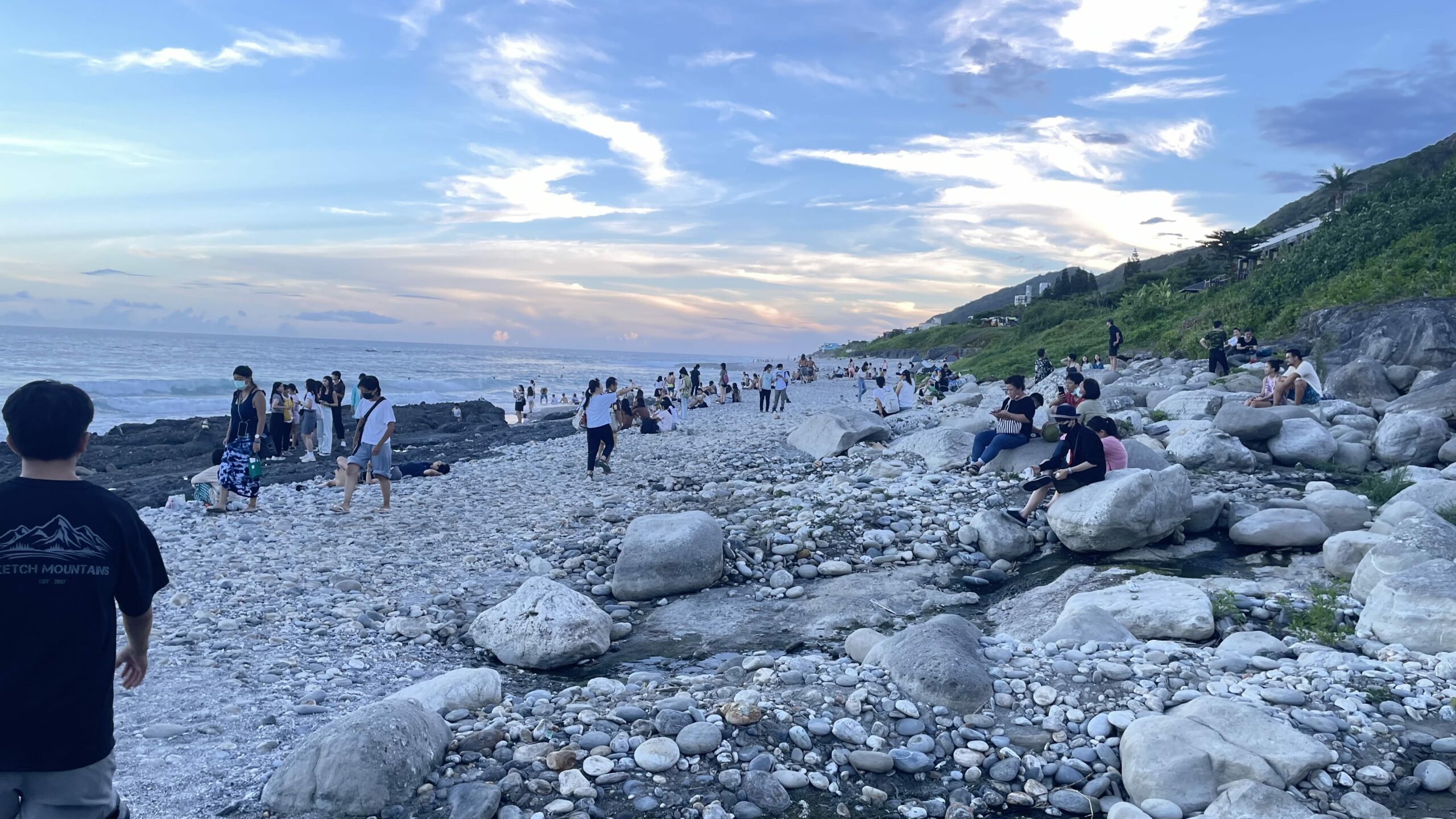 Outside the festival entrance there are cars parked on the roadside, no police, heavy-handed security, or bands on wrists. There isn’t even an entrance fee. It’s free as you go, 3 p.m. and ice cream weather, with the news saying Hualien is experiencing record temperatures of up 40.8 C.

Below the ridge, a beige-like tent city, reminiscent of the “Mad Max” Wastelands set-up, ripples and billows when the wind stirs under a cerulean sky, merging with the Pacific Ocean on the horizon. There are some odd, spindly sculptures made from galvanized steel and driftwood, perched like birds, with tops that spin in the breeze. Fashion-wise, there are a lot of middle-Earth-inspired outerwear, sandals, tie-dye and boho-surfer vibes – ethnic, layered and with nods to Indigenous culture. For the guys, it’s tops off, or a T-shirt/Bermuda shirt permutation, baggy shorts, and bucket hats, with earthy browns, sand, and green. Even so there’s a healthy mix of people, everyone from nuclear families to holidaymakers, businessmen in chinos, beach bums, young and old.

The heat has people gathering under tents or flitting from one shaded area to the next. A couple of coffee shops are doing good business. A bass starts to pound, meaning the music is has begun. Principally, there is a main stage not far from the entrance for the bands and a DJ stage at the other end of the site. Between these two points there is an open-air stage backlit at night by the moon where you can serendipitously catch anything from didgeridoo and vocal performances, to flute recitals, Shakespeare, and ad hoc Frisbee tournaments.

Walking up and down the site there are over the course of the event more than 300 vendors, selling mugs and vessels and assorted pottery. Stores feature artfully bleached bones, troves of jewelry made from shells and polished stone, along with Taiwan cypress carved goods, driftwood sculptures, and knitwear. There are also services like haircuts, even prison tattoos.

One tent has a mini art gallery featuring the works of a Kaohsiung student who is half Atayal and goes by the name Keke Ke Minhao (柯柯柯閔浩). The kid with the yellow and red braid, painted face, and cool entrepreneurial spirit has a fun sales patter and cool attitude as we negotiate the sale of a NT$250 masterpiece among his offbeat, multimedia drawings, paintings, and photos. The Wild Market could be described as an amalgam simple, farmer’s, or flea market, as it brings together a wide range of independent producers who don’t get the visibility of mainstream sales and are not scaled for manufacturing. They all seem to get on with each other and there’s a lot of swapping of goods.

I was even offered free coffee cups when I showed some interest in them. “Maybe you like them so much you come back and buy 10,” the vendor laughs.

The music and entertainment side of the event is called Ocean Home. “So, it’s two festivals in one,” I was informed by a lady with gray hair who calls herself called Tina (“no surname”) and who is certain the first gathering took place in 2011.

“There were just six (other estimates say 20) vendors in the beginning but actually we just wanted to go swimming instead, so people had to wait for us before they could buy something. Everyone was having a good time and the next year they came back and it became a thing,” Tina says.

Meals were made and shared. A community formed and, in the evening, there were singers, fire spinners, poets, and DJs. It was so good they did it again the next year and the year after, making it a fair-sized festival that has grown organically, by word of mouth and reputation. Even so, the festival is not that well known internationally, let alone nationally, and has a true counterculture vibe that is rare. In contrast to music festivals that are organized like military operations, with water guns, pyrotechnics, inflatable monsters, and MCs repeatedly shouting “put your hands in the air, like you just don’t care,” Ocean Home Wild Market is relaxed. Vendors and visitors alike stroll around, listen, take part in jamming sessions, or go down to the beach for a dip. It is, after all, a six-day event.

Vendors still have the attitude of “Ocean” or “Market” and often chose to play on the beach rather than tend to their wares. Commerce, it seems, didn’t win the day.

I put it to the Ocean Home Wild Market organizers whether the ethos is deliberately similar to early Burning Man in the U.S., which got going with 35 people on a San Francisco beach in 1986 after thinking burning an effigy was cool. The event grew, money was banned and you had to get supplies through bartering or gifting.

“Of course, it’s not intentional,” is the blunt reply from the Event General Coordinator of Ocean Home Wild Market 22, in a written reply. “Of course, there are analogies between the two events, but I don't think there are many conditions.

“Burning Man is a ticketed event while Ocean Home Wild Market is free; Burning Man promotes anti-consumerism, while Wild Market encourages closer interaction and support with the creators. I think Burning Man has created another level of sophistication in the last few decades, and the challenges it faces must be very, very different.”

Ocean Home Wild Market is laid back, low cost and clearly not all about the money. Even the acts play for free. After a performance a hat or blanket will sometimes go into the audience and people show their appreciation with some cash. It’s not a lot but it helps.

Many of the musicians who attend are veterans on the indie scene and tend toward experimental sounds. There are half a dozen or more groups of like-minded souls who will just jam for an hour or so on stage, get set in a groove and before you know it have done a 90-minute set.

DJ Allen Blow is chilling near the coffee shop where the musicians congregate before and after sets. An Ocean Home Wild Market veteran, he has already played the second set of the afternoon in the DJ tent, putting down some tropical dub style tunes such as Kunka’s “Midnight.” Higher energy sounds from DJs like James Ho and Shwamp are left for the evening when it is cooler from the sea breeze. Allen will also perform with his ad hoc big band Island Futurism. He describes it as “afro-jazz beats, mixed up with other genres, and especially futurism. I LOVE futurism.”

The performance is loose and experimental. There’s myriad voices and ideas and they somehow coalesce into something fantastic. No-one will ever hear the same songs again, as they are spontaneous – refreshing in a world of studio audio, mechanical perfection.

“I’ve been coming from near the time it started and it’s been getting more and popular,” Allen says of Ocean Home Wild Market. “It used to have some Chinese people but not anymore, not after the politics and COVID.”

He estimates that on the weekend up to 10,000 per day came to see the shows. However, since there is no ticketing or accounting of any kind, it’s hard to say for sure and estimates elsewhere were hazy. During the weekday events, when there are courses for yoga and workshops, a couple of thousand pour in most days.

Some well-known names also take part under different names so as not to cause a fuss, including Sunset Rollercoaster’s drummer Zun Long and L8ching, while dub rockers Penglai Xianshan (蓬萊仙山) put on a great show.

A one-hour stream of the event’s musical highlights from 25 musicians or bands has also been produced, for free, on Soundcloud, called Jump Into the Sea or Dance (跳海或是跳舞). It was produced by Chen How (Hang in the Air/Inhuman/Island Futurism), mastered by Mong Tong and remixed by bass pioneer Qin Qin Qin.

As you might expect the venue is clean and tidy. Conservation has been at the heart of Ocean Home Wild Market since day one. In preparing the site, volunteers are encouraged to alter the surroundings as little as possible. They are instructed to weed the ground “but it must not be over organized; please take care of insects and small animals when setting up stores.”

When the festival is over the site reverts to nature and its footprint is no longer visible. This “no trace” approach to running an event is also part of Ocean Home Wild Market’s philosophy. Every year it’s like it never happened … until it happens again. Next Ocean Home Wild Market could have a problem

Eleven years old and growing strong, Ocean Home Wild Market is a lively market and music festival that takes place annually over seven days. It pulled in record numbers of people this year and could be on the cusp of becoming a major countercultural event.

However, next year’s version of the event is threatened by rumors that the owner of the land is selling up, which begs the question whether 2022 was the biggest, best and final Ocean Home Wild Market? We asked the organizers about this and a few other issues and were given a written statement from the Event General Coordinator of Ocean Home Wild Market 22 that said they were not sure the land would be sold and they were “talking about that.” As for whether it would be held elsewhere if the land was sold, that was also being discussed.

Asked about how many people turned up this year for the festival, the committee said: “Because it was a non-ticketed event, people were free to come and go as they pleased, and because we had limited manpower, we honestly didn't bother to do a count. In 2020, there was a capacity rule due to the epidemic, and we counted about 3,000 people per day on the weekend.”

The organizing committee of Ocean Home Wild Market comprises a number of volunteer groups that work together, including those in charge of booths, art, construction, installation, kitchen, plumbing, electrical, mechanical, traffic control, health care, workshops, environmental cinema, and the performance group responsible for the three stages.

“The above is just a rough overview. Each year's Wild Market is like a big experiment, with a new look due to the different people who join.”

As for the festival staying free, both metaphorically and in terms of paying entrance money, the organizers reply: “Free is an ideal, and it can be done under certain conditions, including the relationship and distribution of land, people and resources.

“We don't really know if there are conditions that will allow it to continue in the future.
Free is really the most expensive, and I'm sure our fellow volunteers understand that, and we are proud to create such a variety of free events year after year.”

Finally, asked why the event has steadily grown more successful, the organizers say, “We don't really have a clue, we're just serious about having fun.”

Infinity Sunset Tour - A View From Behind the Drums
See More