It's 1984, and producer/composer Bruce Chen is in his office in the production department of Tony Records. It's the early eighties in Taipei City, so we can assume the scent of cigarette smoke hangs heavy in the air and the offices are filled with overworked and tea-drunk employees, all scrambling for the next big hit to crank out for the rabid music consumers of Taiwan's Economic Miracle period.

In the center of this Mando-pop pressure cooker, Chen receives a call from someone at local television station CTV, one of barely a handful on the air in Taiwan at the time. They've got a show set to begin filming, a historical drama by the name of Yi Jian Mei, and they're looking for an artist to do the theme song. Chen doesn't have to think too long or hard on this one. One of his Tony Records recording artists, Fei Yu-ching, is also under contract with the TV station, and he's got a new album due soon. The timing couldn't be better, or so it seems.

Chen and Fei, then in his late twenties and with a few years in the biz under his belt (which he cinches up tight in recording sessions to muster more power from his diaphragm, he says), set to work on the theme, a dreamy, melancholic Chinese-style ballad, the likes of which play out over the end credits of Taiwanese soaps and melodramas to this day. The song, also called "Yi Jian Mei," is recorded right on schedule, ready for release not only as a single for Fei's forthcoming album, Water of the Yangtze River, but for the first episode of series of the same name. It's perfect. That's when everything starts to go wrong. 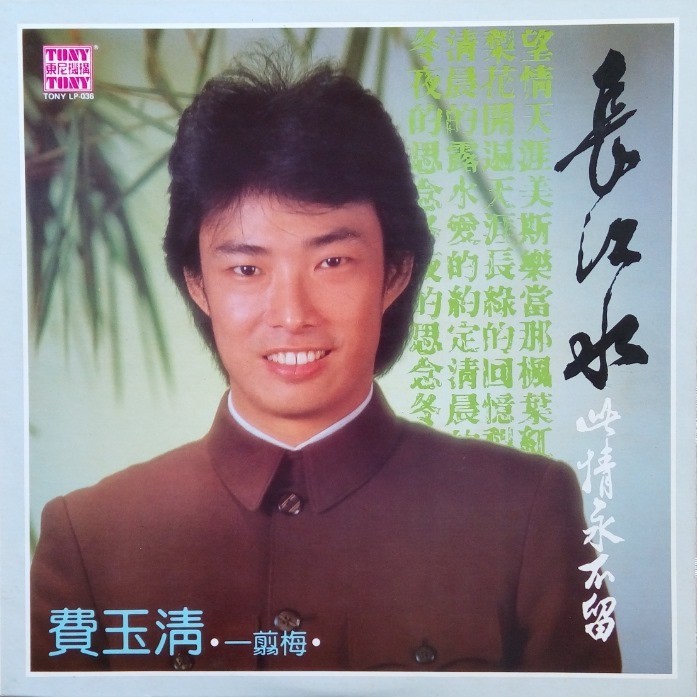 Unbeknownst to Chen or Fei, Mei Chang-ling, Chairman of CTV, is laid up at Taipei Veterans Hospital, gravely ill. The title of CTV's new drama, which translates to "One Plum Blossom," is taken by the family as a bad omen. They insist it be changed, and at their behest the series suddenly becomes The Dream of the Border Town. Despite the new name, Mei, patriarch of network and family, passes away, and filming on the series comes to an abrupt halt. The theme Fei and Chen slaved over is quietly released on the B-side of Fei's new album, leaving listeners scratching their heads at why such a heart-rending and soulful song would be handed such an ignominious fate.

Some time passes, and Mei Chang-ling is laid to rest. The series, once Yi Jian Mei, then The Dream of the Border Town, is resurrected under the former title, bad mojo and all. Chen hears through the music industry grapevine that another singer, Kim Pei-shan, has been contracted to perform the theme. Irate, he picks up the phone and makes a call, one he would keep secret from his employers and from Fei for nearly four decades. He gets CTV's production coordinator on the line, sternly reminding him that the network had long lamented the fact that Fei had never worked with them. If they can't appreciate his work when he finally does lay down a track for one of their productions, they shouldn't bother contacting Fei about working for them again. He hangs up and waits.

A few hours later, the production coordinator calls back. They'll bring Fei and his song back into the fold, he says. And so, the song "Yi Jian Mei" gets a second chance at life, no one involved in its already scattered story aware that the third act, set to take place some 37 years in the future, will be the most bizarre of all.

It's January 6th, 2020. Somewhere in a wintry corner of China, character actor Zhang Aiqin, known to Chinese film fans as a man of somewhat atypical appearance, most notably the duck egg-like shape of his frequently shaved head, posts a ten-second clip of him singing in the snow. In a faithful rendition of "Yi Jian Mei," he croons out the opening line, part of which goes "Xue hua piao piao, bei feng xiao xiao," or "The snowflakes are fluttering and the north wind is blowing." He puts it on Kuaishou, a social media app popular among Chinese, where it eventually gains millions of views. The clip then spreads to YouTube and Instagram, gaining yet more views in the West, just as the horrors of the Corona Virus began to take hold, relegating many to the confines of their own homes, giving them yet more time to scour as-yet rarely disturbed (for them) corners of the Internet.

"The clip suddenly became popular in Europe and America," says music historian and owner of BTB Music Workshop in Taipei Odie Chan. "It also set off some crazy cover versions and got hot on Spotify."

Hot would be an understatement. The song landed on the Viral 50 charts in Norway, Finland, Sweden and New Zealand. By the last weekend of May, TikTok took notice, propelling the song to yet new, stranger heights. A remix with Childish Gambino popped up on YouTube, garnering a few more hundred thousand views. For many outside Taiwan and China, the song was new, or new to them, rather. But for Taiwanese especially, the song has never gone away since they, or their parents, first heard it in the early eighties.

"Actually, it's been a hit for decades," says Lin Tai-wei, former newspaper editor and Taiwan music connoisseur. "It's still in the Top 100 rankings at KTVs for certain genres. It's a true classic for at least two generations in Taiwan."
Still, the question, or questions, remain: Why this particular song? And why now? The song's initial popularity, says Chan, goes back to a time when Martial Law was in place in Taiwan, and entertainment options were limited. CTV was one of three television stations in the country. What people watched and listened to was tightly controlled. Thus, anything that came out—anything at all—especially a song associated with a drama airing on one of three available channels, had potential for hit status. It just so happens, says Chan, that "Yi Jian Mei" was also a damn fine Mando-pop tune.

"The lyrics, the tune, and the arrangement of the song are very oriental and classical, with a bit of bleak beauty," he says. "Usually, poignant Chinese-style songs could be successful [back then]."

So, you might chalk up the song's unwieldly third coming to the kind of staying power all hit songs of yesteryear bear. It happened to Queen with "Bohemian Rhapsody," re-released in 1991 following the death of Freddie Mercury, reaching number one again, 16 years after it first topped the charts. If it can happen to the English kings of uber-produced arena rock, why can't it happen to a giant of the musical Sinosphere, especially one who endured far longer than many of his peers, eastern and western alike?

Speaking of which, Fei's career would span just over forty years, amounting to multiple lifetimes in the entertainment industry. He released 40 albums in all, playing concerts up until 2018, when he announced his retirement. He enjoyed chart success until the late nineties, when his output waned and he settled into a niche as a nostalgia act. But "Yi Jian Mei" remained a staple of his live repertoire throughout the rest of his storied career—the song he couldn't leave the building without singing. He has yet to speak publicly on his newfound viral resurgence, choosing to release statements only via his agent. He has expressed surprise that a song so old is new again, but it won't bring him out of retirement.

"He is very determined to retire," says Chan, who points out that "Yi Jian Mei" is just one of "hundreds," in his words, of hit songs for this legendary performer. "This 'surprise' will not change his decision."