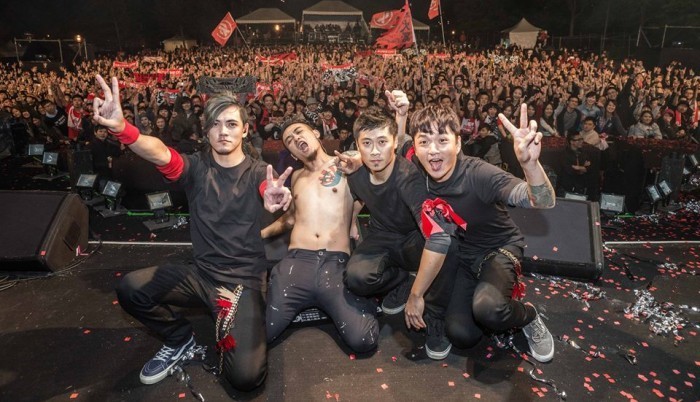 The ardent big boys formed FIRE EX. when they were 16 years old and now they’ve turned 30s.  For them, simply make music is their initial intention that will never be changed.  But all of a sudden, they became wildly well-known because of the song “Island’s Sunrise（島嶼天光）”.  The song not only became the classic theme song of the student movement, it also won them “Song of the Year（最佳年度歌曲獎）” award at the Golden Melody Awards（金曲獎）in 2014.

In October, 2015, FIRE EX. announced that they’ll hold the only special concert of the year in Kaohsiung on Dec 18th and they also revealed the setbacks they’ve suffered in the past year, even thinking about dismissing the band.  Everything happens too fast and we seem to neglect the pressure they’ve borne after being known by so many people.  In an afternoon of November, we went to the company “Fire on Music（火氣音樂）” formed by FIRE EX. in September to talk with them about their feelings and experience along the way.  FIRE EX. is not only the band who wrote a famous song during the Sunflower Movement（太陽花運動）, it is also a band that faces obstacles, pressure and has reflected and grown from the experience.

Sam（大正）, Jc（皮皮）and Orio（宇辰）have been very good friends since high school.  They fell in love with rock’n’roll in high school so each of them then learned to play one instrument, forming the band “FIRE EX.”  For them, having the chance to do something they love with their best friends and improving it, is a pure “initial intention”.  FIRE EX. has also been through the same path all the independent bands have gone through ─ not being approved by their parents, facing economic pressure and also the psychological stress of not knowing whether they can get it done well.  Even if “Island’s Sunrise” has won them great reputation, it also made them being questioned by many people and have to carry the weight of expectations.  Sam, the lead vocalist says “At this point, though you’ve remained the same starting point, you’ll still be questioned and receive complicated expectations.”  Their motive of simply making music has been distorted.  They started to panic, not knowing how to go on.  What’s more, they also had different ideas and practice from their former management company so this April, they chose to stay in Ishigaki Island for some time to take a break and to think it through.  It’s also during the days in Ishigaki Island that they’ve regained the initial intention of simply making music.

At the beginning of this year, Sam was producing the background music for a movie（The theme song “Crossroads（十字路口）” of the movie “Maverick（菜鳥）” has been released.）, preparing for the concert for Cheng Nan-jung Freedom of Speech Day（鄭南榕言論自由日）and also the wedding, all at the same time; what’s more, they also encountered some problems they couldn’t solve at Mega Port Festival（大港開唱）.  Being exhausted physically and mentally, Sam decided to find some quiet place to take a break.  His Japanese friend then recommend him to go to Ishigaki Island in Japan so in April, Sam went to the quiet Japanese island where he could play baseball and the flight tickets there are also really cheap.

Jc and Orio joined him afterwards.  When talking about their life in the island, Orio says “The life in Ishigaki Island is really simple.  After getting up, we make music, drink and play baseball with our friends.  It’s just like making music when we were young, simply doing one thing.”  All the troubles seemed to be erased there.  They could go back to the simple state, making their favorite music with their best friends.  Within one month, they’ve created a dozen of songs.

After being back to Taiwan, they’ve prepared for a long time and formed their own company “Fire on Music” this September, heading to a new stage.  Sam says that it’s just like the determination they’ve had years ago, choosing to make independent music though they were going against their parents’ expectation by doing this.  They need lots of preparation and courage every time when they decide to enter a next stage.  FIRE EX. feel that they are lucky to have support from their friends during months of preparation.  Jc also feels more “steady and sure” now, being able to simply do what he wants to do. After “Island’s Sunrise” is being released over one year, FIRE EX. says that frankly, they didn’t know how many fans would still be willing to come to their concert.  Planning to hold the only special concert of this year in Kaohsiung on December 18th, they haven’t thought about adding any additional shows before or selling more tickets.  Clearly, they didn’t expect their tickets to be sold out within 10 minutes or some even started to sell scalped tickets.  Why haven’t you thought of adding additional shows before?  Sam the lead vocalist says “If we want to make this concert a profound one, we can only present the same context once so it will be the most real one.”  This time, Fire EX. brought the concert back to their hometown, making “Back to Dream Factory（重返夢工廠）” their slogan and called their fans to keep making dreams.  All the performance will return to the most original state.  It’s just like what Ti Wu（吳迪）says “A rock bans doesn’t need any tricks.  This time, we’ll make the concert with only music!”

◎What does FIRE EX. like to do in private? Ti Wu joined the band as a drummer in 2012, but for Sam, Jc and Orio, they’ve accompanied each other through the confusion they had during their teens up till now, when they all turned 30s.  Besides practicing the performance, they like to play baseball and they even fall in love with playing gas guns these days.  They says jokingly that one of the reasons why they chose Ti Wu to be their fourth member was that Ti Wu also plays baseball.  Ti Wu is also a straightforward person so they don’t need to conjecture about what is in his mind.

You may think that those who are in the bands must be very cool, but the members from FIRE EX. are just like four big boys, making fun of each other once in a while.  When being asked about whether they have any habits before the performance, Sam says that that he will still vomit if being too nervous（Ti Wu says that Sam even vomits when being the outfielder.）  Orio will drink when feeling nervous; he is also used to reply all the unread messages before going on the stage.  As for Jc and Ti Wu, they both like to stay in a quiet place, doing some warm-up or just cut the fingernails.

All the big stars are probably like this, “After the first note is played on the stage,（our nervousness）has disappeared completely!”

What will FIRE EX. be like in their 16th year?

FIRE EX. has finished the recording of nine songs and the new album is planned to be released at the beginning of 2016.  In the album, they’ll share everything in their lives from the viewpoint of guys turning 30s and they may also release the album in Japan.  Their future goal?  Sam says that the market in Taiwan is quite small compared with other countries; even if they’re holding a tour concert, they can only do it in the north, middle and south of Taiwan.  They says that they may start the plan to perform in the countryside after the new album is released and that if they have the abilities to accomplish more things in the future, they hope to share the resources and experience with the younger bands and to bring their music to nearby countries together.

“Do the right thing and don’t go against our faith.”  I believe we can still release ourselves and thrive in the world of rock’n’roll together with FIRE EX.