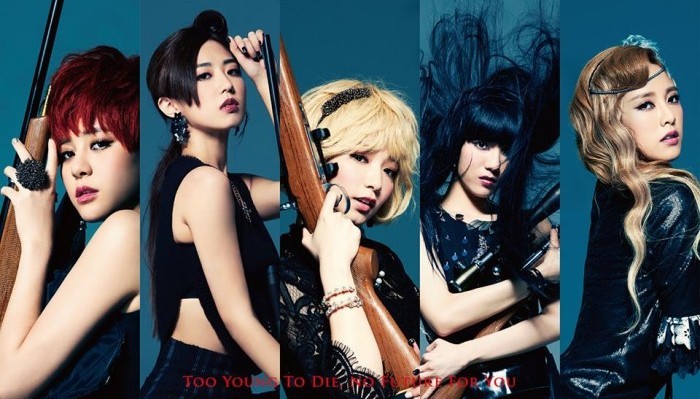 Popu Lady's record label announced that the group will undergo a poll-based elimination contest after the release of their fourth EP "Gossip Girls" on November 22th. Popu Lady's record label cited the three-year-old group's "somewhat less than satisfactory" performance as the reason for this decision. The label proposed a "downsizing" plan for the members of Popu Lady, in which they had to showcase their individual talents and ambition within a given time to retain their place in the group. Within a span of two months, the five members will compete against each other in various talent segments and at live performances. Fans will then be able to vote online for the best performers, with the evaluation process becoming an online series. The member with the most votes will earn the opportunity to release her own photobook EP, while the one with the fewest votes will have to leave Popu Lady.

Popu Lady found it difficult to conceal their unease and anxiety over the announcement. Choking back tears, DaYuan Lin said it would have been better if she left the group voluntarily instead of having the elimination. Fans were also quick to defend their idols, stressing that the five members of Popu Lady are like the five fingers on a hand, each one is irreplaceable, hence the slogan "5 - 1 = 0". On the net, fans blasted the record label for this publicity stunt, with some declaring that they will bring down the contest website, refuse to vote, or even try to create a tie vote for all five members. Whether the elimination will be carried out for real is still an uncertainty, but the dropping of this bomb has indeed brought Popu Lady to the forefront of media attention, making it a fairly effective move. Launched in 2005, Blackie's Teenage Club was a talent show that led to the formation of the girl group Hey Girl.

In reality, Popu Lady is not the first Taiwanese group to be subjected to such competition, in which one's showbiz survival is determined by talent and popularity. Years ago, the once popular Bang Bang Tang and Blackie's Teenage Club were shows that unearthed the members of Lollipop F and Hey Girl through talent and popularity contests. But compared to Taiwan, poll-based elimination contests have a far longer history in South Korea and Japan. In South Korea, many boy bands and girl groups had to endure elimination rounds before their debuts. They had to prove themselves better than the vast number of trainees under their company's wing. Even BIGBANG, currently one of the hottest groups in Asia, underwent an elimination contest prior to their debut. The whole process was later broadcasted as a reality show.

South Korean entertainment companies typically select a large number of eager youths who will join them as trainees. After undergoing a long period of singing and dance lessons, less than 50% of the initial trainees are able to debut successfully. Picking the right candidates through competition to form groups, has become a way for such companies to "digest" the large numbers of trainees that they handle. In contrast to the pre-debut competitive format practiced in South Korea, Japan's AKB48 sends its trainees directly to the frontline, with only the fittest being allowed to stay.

Based in Tokyo's Akihabara, AKB48 debuted in 2005. Its initial strength of 24 members has risen and dropped over the years. With more than 130 official members at present（not including sister groups based in other Japanese regions or overseas）, the group holds the Guinness World Record for the "largest pop group". For those who stood out from the competition and made it through the open selection and company evaluation rounds to become official members, their journey to becoming Japan's national idols has only just begun. Other than those who were known to have resorted to the casting couch, a normal member seeking opportunities for exposure in this 100+ group must first develop a fan base through public performances at her respective local theater. She will then have to clinch a top 16 position in the annual popularity "general elections", in which votes are cast by fans to support their favorites, only then would she have the chance to take part in the group's promotion of their singles and earn exposure time on TV. The increased fan base that she builds through such exposure will help support her in the next election. Although AKB48 does not have a clear elimination mechanism, an unpopular member would have no work and be naturally weeded out in this pragmatic and cruel ecosystem.

To vote in the general elections, which is conducted online, you must either be a paying member of AKB48 or its sister group's fanclub, or purchase a single which comes with a voting ticket. 80 members（varies from year to year）are selected and grouped into five groups according to the election results. The first group, comprising the top 16 members, will get to record the A-side tracks and enjoy exposure on TV programs. The remaining four groups will sing the B-side tracks and be eligible to fill vacant performance spots, with rankings deciding the order in which members will be called up. Clinching the opportunity to perform is certainly not an easy feat. Opportunities for exposure is limited without a strong fan base, and the failure to get on TV will further limit a member's fan base. Although you could spin this negative cycle as a process through which anyone can attain fame, the reality is that anyone could axed if they so much as fail to grasp the first opportunity that comes their way.

AKB48 held its seventh general elections this year. Previously, all members including those from sister groups held the right to be a candidate. But since last year, members are allowed to decide if they want to take part in the elections. This means a member must have the confidence and be willing to fight for votes, since she has to submit an application to become a candidate. Haruna Kojima, who has ranked in the top 10 for the last few years and now enjoys a steady supply of showbiz work, chose not to take part in this game of survival where popularity is paramount. Fans who want their idols to take the top spots have dug deep into their wallets. Since each CD entitles a fan to one vote, many fans would buy singles in bulk numbers. Considering that Rino Sashihara, who won the elections this year, got nearly 200,000 votes, it is no surprise that AKB48 has sold more than 40 million singles in total this year. While AKB48's general elections may be a test of popularity for its members, the media exposure, online elements, and CD sales, are all simply a grand marketing effort in the eyes of the company managing the group. The "AKB economy" is now being studied by Japanese academics. This May, South Korea's JYP Entertainment worked with a TV channel to launch the reality survival show Sixteen. 16 trainees partook in a weekly talent show series and viewers got to decide on the seven who will ultimately debut. The absence of the well-liked Tzu-yu Chou （Taiwan）and highly talented Momo（Japan） from the final seven, prompted JYP to "expand" the band and include these two in its line-up, which sparked discontent among some viewers.

Popu Lady's elimination contest is structured like the pre-debut trainee elimination process practiced in South Korea, while its fan-voting mechanism is similar to AKB48's. Will Popu Lady's record label go through with their plan to kick out the worst performer? Or is this merely a marketing plan to promote their EP? Would Popu Lady get to retain all five members or change its line-up, perhaps because the vote is too close to call for any elimination to be fair? The answers will only be revealed in November.

Popu Lady is releasing the dance version of “POPU OK BUM（POPU OK繃）”, which has won praise from their fans