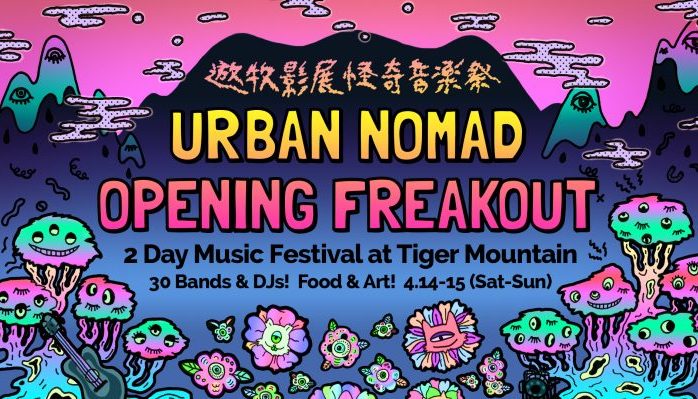 For 2018, the Urban Nomad Opening Freakout (遊牧影展怪奇音樂祭) will be held on April 14 and 15 (Sat & Sun) at Taipei’s best outdoor music venue, Tiger Mountain (微遠虎山), a green mountain valley only a 10-minute taxi ride from Taipei 101. There will also be a warm-up party before the festival, a late-night afterparty on April 14, and more fun events. Generally, Saturday's lineup will focus on garage rock, neo-psychedelia, and electronic, while Sunday will feature neo-soul, funk, ska and jazz. And don't miss the CIRCUS STAGE for jugglers, aerial artists and fire eaters, happening both days.

This party began in 2008 as an opening party for the Urban Nomad Film Fest, kicking off a decade of musical events inviting the best, weirdest and most outrageous underground and indie musical acts to Taiwan. Highlights include I.U.D. (feat Liz Bougatsos of Gang Gang Dance) for the Video Mindfuck Party (2011), Trippple Nippples (2012), Mop of Head (2013, 2016), Autopsy for a Drowned Shrimp (2015), Kinoco Hotel (2017), and many more. Since 2015, Urban Nomad's opening party has grown to become its own event, an outdoor music festival that kicks off the Urban Nomad spring season -- the Urban Nomad Opening Freakout.