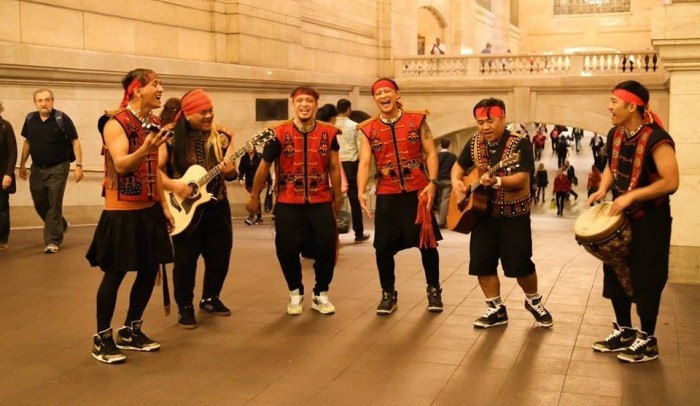 After a long period of planning, the CMJ 2015 Taiwan Beats showcase was held on October 13th and attended by several major international media outlets, including the New York Times, the New York Post and AP. The event featured performances by the three Taiwanese bands, Boxing, io and Soft Lipa. Given the increased international media attention that the event has attracted, this development represents a major breakthrough for Taiwan, which sent its first batch of Taiwanese representatives to participate in the CMJ Music Marathon five years ago.

The CMJ Music Marathon 2015 ran from October 13th to 17th, giving. Apart from performing at the festival, Taiwanese music groups and artists also enjoyed the rare opportunity to partake in a NY subway flash mob event. Riding on the momentum of their Best Newcomer win at the 26th Golden Melody Awards, Boxing went on to clinch a spot to the US at the CMJ open selection event. In addition to the Taiwan Beats performance, CMJ organizers also arranged for Boxing to perform at Bowery Electric, a well-known venue in the independent music scene, comparable to the Witch House or the Underground in Taipei. In an effort to get closer to the crowd and move them, Boxing had their first unplugged performance there, which turned out to be a bet that paid off as the Pingtung group's raw music managed to stir the audience's souls. One IG blogger posted, there and then, the photos that she had taken with Boxing.

◎io paying tribute to past legends with original music CMJ Twitter posting of io's performance at The Bitter End.

Present at the CMJ Music Marathon was io, a band known for its crisp urban rock style. At 6pm on October 14th, io performed at the The Bitter End. Established in 1962, The Bitter End has been graced by the presence of music greats spanning 54 years, including legends and stars like Ray Charles, Bob Dylan, Joni Mitchell, Woody Allen, Lady Gaga, Norah Jones and Taylor Swift.

The gig proved to be a nerve-wracking honor for io, which held numerous practice sessions in their hotel room, in hope that they can pay tribute, with quality music, to the past greats that have performed here. The performance also serves as part of the band's preparations to launch a new album after a gap of three years. On October 15th, GCA Entertainment music director Ed Yen represented the participating team at international forum. At the forum, Yen spoke about Taiwan's determination to support the global expansion of its music industry with its policies, as well as his hope that more opportunities for international cooperation can arise through participation in major music festivals. Several participating speakers had also expressed strong interest in cross-regional cooperation projects with Taiwanese and other Chinese performers. After the forum ended, they continued their discussions with Yen and went away with a better understanding of Taiwan's prominent position in the Greater China music market. It is hoped that this will pave the way for important partnerships in the international performance market. The New York City Subway has a nearly 150-year history and serves an important role in the lives of New York residents. It is an irreplaceable aspect of the city's identity. A few days after participating at the festival, io and Boxing were able to experience the New York spirit in a new way. Together with CMJ organizers, the two bands pulled off a subway flash mob event on October 15th, with the aim of sharing their music with more people and promoting it on social media, and also to unleash the vitality of the CMJ Music Marathon onto the public.

Io's impromptu performance was held at Long Island's Court Square Station, attracting much attention and interest from commuters, some of who inquired about the band's name. Boxing performed at New York's famous Grand Central Station instead. This is also first time that Boxing performed in traditional Paiwan clothing. The band's three minute long flash performance was enjoyed by everyone, even police officers. Many commuters were drawn to their melodious singing of Paiwan folk songs and took the opportunity to take photos with the band, marking a perfect end to the subway flash mob event.