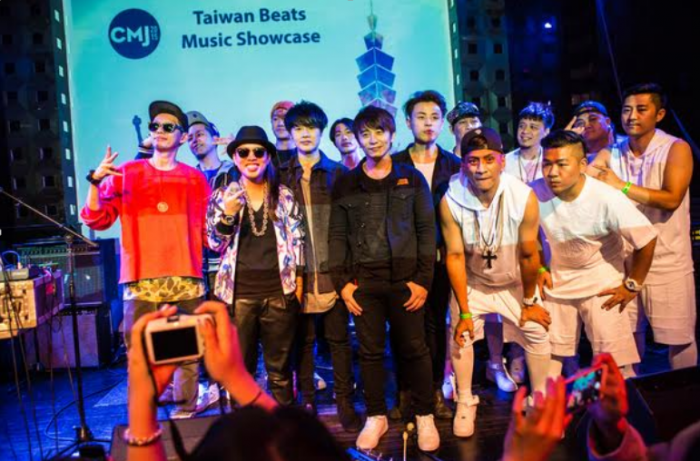 Many Chinese and Western press attended the press conference.  New York Times, having noticed Taiwanese musicians’ extraordinary performance at CMJ Music Marathon these years, also attended the press conference for an exclusive interview.  Soft Lipa has been known in the hip hop world in Taiwan because of his unique soft hip hop style.  The members from io all have lived in Canada for some time and they said that they felt at ease when performing in the English-speaking city.  As for Boxing, they’ve gained much media attention not only because their agent is A-mei（張惠妹）, but also because they’ve won the “Best New Artist” in the Golden Melody Awards of this year.  They name the brand “Boxing” since they’re all professional boxers and all enjoy playing music; attending boxing competitions then become their source of income that keeps supporting them to reach their goal. This year, Taiwan Beats even had the chance to cooperate with Amazingtunes, the most well-known and the biggest agency in England.  Treya, an emerging Taiwanese American singer-songwriter managed by Amazingtunes, also did the warm up show for Taiwan Beats.  Treya sang with self-accompaniment on the guitar and electronical piano and his characteristic voice has grabbed the attention of the fans immediately.

After Treya’s performance, Boxing opened the showcase with their theme song, “Tiyamen（我們Tiyamen）” which was sung in their native language, Payuan.  Tiyamen is a rock song that combines rap to convey their own idea and the audience were invigorated right away.  Because of the passion for music born in their aboriginal blood, Boxing’s music is often said to be like the latino living in the mountains and they did sing the “Urban Latino（山上拉釘人）” with very latino style while the song is actually about the feelings of workers.  Kasiwa（葛西瓦）, the lead vocal, even jumped off the stage and danced with a spectator, leaving the audience with unforgettable memory with their merry and toe-tapping performance.

On the other hand, the following songs such as “Mission（使命）”, “Heart Beating（心跳動）” and “Ancestors’ Reminders（祖先的叮嚀）” revealed that Boxing’s songs have come from the real experience they’ve had in their lives.  In the middle of their performance, one of the electric guitars suddenly had a short circuit, leaving the concert with a burning smell.  The members of Boxing thus joked that the smell was just like the grilled pork from their hometown, which made them hungry already.  Boxing was also been called “The Maori Band from Taiwan” by foreign press.  With their Austronesian origin, they are indeed blood-related to the Maori and some of the muscular and dark-colored members do bear a passing resemblance to the Maori from New Zealand. Following Boxing’s performance, io performed the high-intensity English rock song “History” as their first song at the showcase.  During the interview, the members from io said though it’s their first time performing in New York, they could be closer to the origin of their song while performing in New York in English since they often write their songs in English first and translate into Chinese afterwards.  In Taiwan, io is often reputed to be the urban style of rock’n’roll; the press in New York, on the other hand, just called them a “pop-rock band” because their music style can be easily understood.  Their music, along with the immersed body language by the lead vocal, Angus, fully expressed their charisma on the stage, making the press and the audience move with the music as well.  Having the chance to listen to io’s classic song “Real（真實）” as the last song of their performance, many fans of io said that it’s totally worth it to come to the showcase.

Many spectators were already waiting for Soft Lipa before he showed up as the final performer.  He warmed up the show with the famous songs “Room（房間）” and “Dreamwriter（夢的作者）”.  When talking about his performance being shortened because of some delay of the showcase on that day, Soft Lipa joked that he could only sing as many songs as he could and didn’t waste time on interacting with the audience.  His fans were also quite surprised when Miss Ko（葛仲珊）suddenly jumped on the stage and joined Soft Lipa when he was singing the lively song “When I’m Here（當我來到這裡）”.

The audience moved with the music when Soft Lipa was singing the well-known songs like “I Want You” and “Haziness（煙霧瀰漫）” and Soft Lipa even encouraged the audience to rap with him till the venue was closed.  “Taiwan Beats” then draw a perfect ending, leaving everyone a wonderful night.

The venue SOB’s is famous for being the cradle of many emerging bands and artists. Kanye West, Drake and many other bands and artists grabbed press’ attention after their performance at SOB’s so SOB’s totally matches CMJ Music Marathon’s goal of promoting the newcomers.  Taiwanese artists have won high praise from the officials for their performance at CMJ Music Marathon these years.  Their performance in 2011 has been covered by New York Times in a feature article and their later performance was also been called “The Best Performance” of the year by the press.  This year, they specially arranged a press conference before “Taiwan Beats” so more press and professionals would stay for the showcase after the press conference was over.  The artists and music from Taiwan would then be reported more extensively and directly. This year is the 35th year of CMJ Music Marathon.  Besides arranging “Taiwan Beats” showcase, the officials also invited three Taiwanese artist groups to join the second show, which will be an unplugged performance.  These three groups will do the flash mob in the subway in New York as well and take part in the interviews and promotion of the Taiwanese booth of CMJ Music Marathon.  The brilliant performance of the Taiwanese artists on the first day was a good starting point and the Taiwanese representatives hope to make the fever keep going on and to promote the pop music from Taiwan to a wider audience.