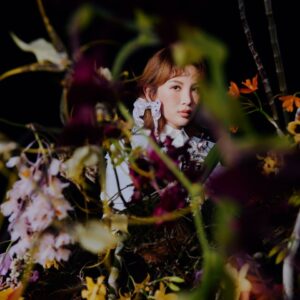 Waa Wei (often stylized as waa wei) is a Taiwanese singer-songwriter, radio DJ, author, actress, and artist. She was the former lead vocalist of the indie band Natural Q, and is recognized as one of the biggest and most beloved female vocalists in Taiwan’s music scene. She has released numerous solo albums: La Dolce Vita in 2007, Graceful Porcupine in 2010, No Crying in 2012, We Still Have to Believe in Love You Bastards in 2014, Run! Frantic Flowers! in 2016, Hidden, Not Forgotten in 2019, and Have a Nice Day in 2021. Waa Wei won Best Female Vocalist in Mandarin for her 2019 album Hidden Not Forgotten. She cried as she accepted her award, thanking her parents in “heaven.” Over the years, Waa Wei has played to international audiences at festivals like Glastonbury and Liverpool Music Festival. Since going solo, she has sparked a new sound infused with sweet freshness, turning youthful musings into blissful ditties with her clear vocals and unique sound. Her many talents as an actress and radio personality are part of her trademark and how she maintains a dedicated connection with her fanbase.