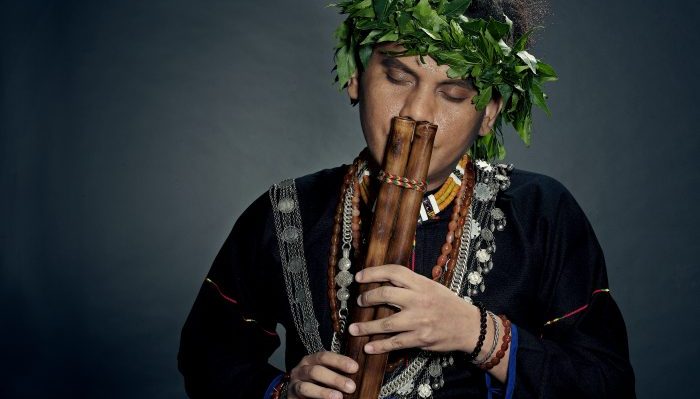 Have you ever listened to the natural sound from Taiwan? Sangpuy’s (桑布伊) voice contains intensive emotions and exceeds the language barrier. It often amazes people whenever he starts to sing. If you haven't heard of it, give it a go! His impressive music won't let you down.

Sangpuy was born in Katratripulr (卡大地布), a Puyuma (卑南) tribe in Taitung County (台東縣), Taiwan. During the youth, he loved singing around the elderlies and later joined the Abo Music (飛魚雲豹音樂工團), a legendary group which gathers varieties of Taiwanese indigenous musicians. They effort to revive their traditional music and culture, and to defend the tribe’s right of substance.

Sangpuy has stepped on the international stage since 2008 and insists on singing with his mother tongue. In 2012, years of experiences finally made him issue the first album Dalan (路), it was not only so-called “ethnical” in one aspect, but also endowed a new life to the elder tunes. In this regard, Sangpuy finally attracted attentions from global fans and media. In 2016, his second album Yaangad (椏幹), meaning “life” in Pinuyumayan (卑南語, the language of Puyuma people), collected more self-written songs by the aids of senior players and accommodated musical elements of Han Chinese and Taiwanese indigenous people, presented a concept of equivalence in his homeland. Yaangad was awarded by the Taiwanese Golden Melody Awards (金曲獎) and was recently nominated by the Independent Music Awards. “The elderlies told me, what we indigenous people live for are always with land and Mother Nature. Therefore, we live for defending lands, defending oceans, defending water resources, defending mountains and forests, as well as the air. Let’s go indigenous people!” said when Sangpuy received the Golden Melody Award for Best Indigenous Singer at the first time. From his concise words, people realised that the music and the land are inseparable. From the tribe to Rainforest World Music Festival and SXSW, through his voices, Sangpuy is inheriting the cultural legacies and memories which his ancestors had left.