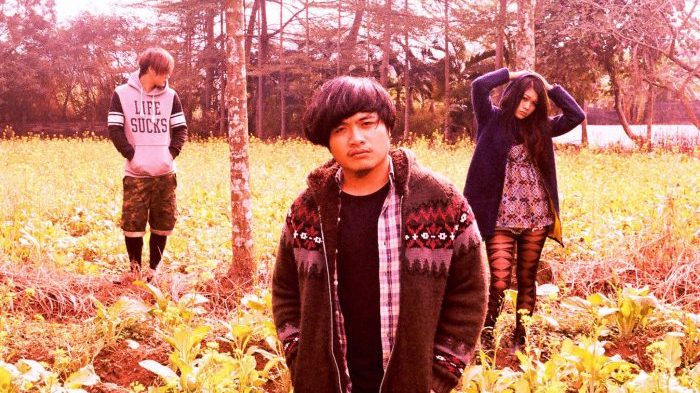 The indiegenous band Outlet Drift consists of two male and one female members. Their music is a combination of traditional melody and fierce grunge rock. (Photo: Outlet Drift Facebook Page)

The punk rock elite trio Outlet Drift consists of three young Amis (one of Taiwanese indigenous groups). The brother and sister, Wushang and Putad Pihay, sing the lead vocals along with the drummer Kurt Ken. They perform impromptu singalong with the songs that fuse the traditional tribe tunes into grunge rock. The stories in their songs are a little bit ridiculous, being like a fierce beast that can swallow the listeners’ sense and sensibility. Also, their music might sound dangerous and crazy rather than kind and friendly. However, behind the strange language are their ways to survive in the cruel reality.

The band’s powerful live performance shows the yearning of the indigenous youths who live in the urban jungle. They still yearn for the wild. After leaving the Pisirian and Edoulan tribes in Taitung, they were all once looking forward to having a promising career in Taipei, but finally found out the huge gap between reality and imagination. After struggling with their minds in the process, they realized that only music could bring the pride back. Thus, they decided to fight back, to spare no effort to confront the cruel reality. "Drowning", the only album released by Outlet Drift so far, was nominated as the Best Rock Album of the Golden Indie Music Awards in 2015.

Their debut album Drowning was released in 2015. At that time, the band went across the sea to Sidney, in order to cooperate with Don Bartley, who did the mastering for Silverchair, The Vines, and Nick Cave and the Bad Seeds. Besides, to preserve the original purity in their music, they also invite Kanji Kawabata (who made instruments for Lin Sheng Xiang and Ken Ohtake) to build exclusive speakers and instruments for them. Outlet Drift is trying to burst your imagination of Taiwanese indigenous music. They turn the scene of misty forest into the psychedelic melodies, finding a way out in the world.