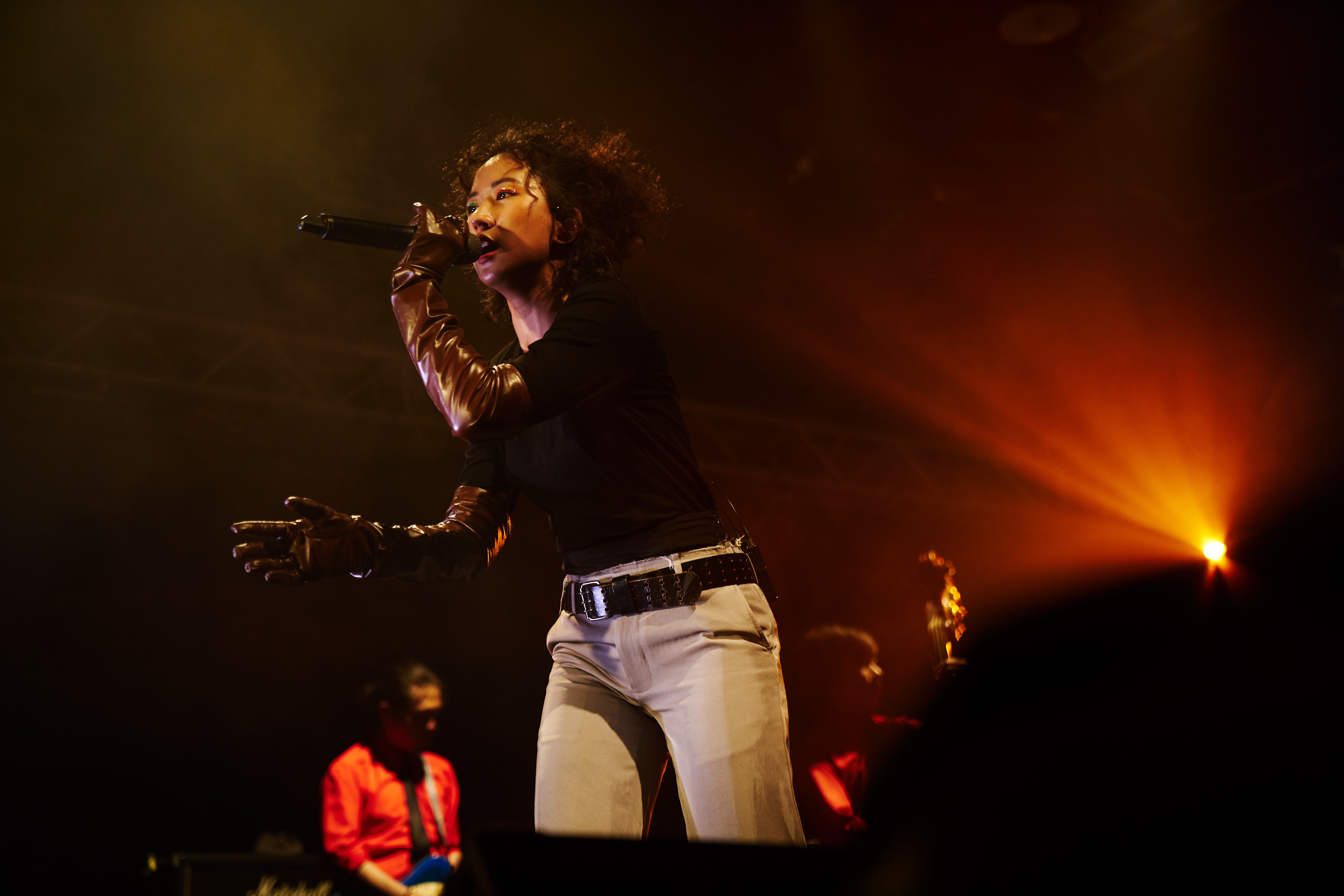 It was an extra performance added for Taipei on September 1, marking the end of 9m88's first solo tour. The 1,000-capacity venue was already 80% packed thirty minutes before the show. Many wait seated on the floor after a long queue trying to secure the best spot.

The show started on-time with 9m88 slowly emerging with the lights from the black backdrop. The cheering and screaming crowd went wild, many taking pictures or videos, proof that they were present for the historic moment. Legacy Taipei is a venue mainly for indie bands or artist, and there is a considerable difference between the crowd reaction for musicians and for pop idols. That's why the thunderous crowd for 9m88, being an indie singer-songwriter who runs her own lable Jazz Baby, is remarkable. Although not completely surprising, but one has to be on the scene to experience that roaring impact of how "a star is born." Her star quality is not limited to singing. She also writes, dances, designs her own outfit, and provides ideas for her own music videos.

With a degree in fashion designing, 9m88 realized that the fashion industry might not be suited for her during her internship at Jason Wu's studio. She decided to pick up singing again, something she's loved since a child and made a huge 180 for her life. She enrolled in The New School in NYC to study vocal performance in the School of Jazz. That was when she got in touch with Taiwanese rapper Leo Wang and sang in his song "Weekends with You." The song's popularity brought her name to young music fans in Taiwan. Many started to ask, "who is this charming voice?"

She collaborated with countless Taiwanese artists in her time at the New School. With increased exposure, more and more people got to know this girl who loves jazz and loves to sing, and wears a big afro rarely seen on Asians. Many started leaving messages asking "when's your album coming?" on her social media.

She finally released her first studio album Beyond Mediocrity in August this year. This night's performance was the release concert that began with, unsurprisingly, the title song. "Beyond Mediocrity" represents 9m88's expectation for herself, that she could feel satisfied with "just above average." Otherwise, between trying to meet the high expectation that the world has for her and her perfectionism, we'd probably have a much longer wait for this album, if it does come at all. The two backup singers and the synth player definitely made the night. The former provided a fullness to the backing with their voice, and the latter brought that signature retro tone that is so 9m88. The 1980s genre "city pop" rose suddenly became popular over the past couple of years among young people in Taiwan. In addition to “Weekends with You”, covering Maria Takeuchi's "Plastic Love" had made 9m88 the new queen of city pop. Corresponding to the style is the song "Love Rain" from the album. The live version featured a carefully choreographed dance number. The effort she makes with the dancing side of things is quite unique among young Taiwanese artists. Most of her contemporaries emphasize on keeping up with the latest trends in music or focus on the sounds of their work; few would stress on their visual presentation aside from packaging or the video.

Songs in the first half of the show were mostly from the album, which 9m88 described as "pep talks" to herself, and also records of her emotional experience. "Aim High" is the former, while songs like "Leftlovers" and "Waste of Time" belong to the latter. This album had been long-awaited and highly expected, but the reviews haven't been all positive. However, whether the album or this night's performance may be seen as 9m88's graduation production. After all, she is kind of a lateboomer in terms of being a career musician. What's presented in front of everyone is the result of what she had learned in the past few years.

In the second half, she covered "Valerie" by Amy Winehouse and the jazz classic "They Can't Take That Away from Me." The mature and solid vocal mastery proclaimed that 9m88 was no longer a rookie. She specifically mentioned "Valerie" as it was the first song she sang in public in New York, and she could still vividly recall how nervous that experience was.

After the relaxed swing of "Valerie" came the highlight of the night. Popular folk-pop singer Crowd Lu made a surprise appearance and two sang "They Can't Take That Away from Me." This unique combo of two artists that could not be more different in their looks and styles blew the audience away. Immediately after came 9m88's most important partner Leo Wang, who had just won Best Mandarin Male Singer of the Golden Melody Awards. He ignited the audience with his very own punch and groove, singing his reggae style hip-hop "Drag Oil Bottle" and then joined 9m88 in their collaboration piece "Airplane Mode." Crowd Lu (right) and 9m88 performed a surprise duet of "They Can't Take That Away from Me." (Photo courtesy of Jazz Baby)

In addition to obvious surprises like cover numbers and guest performances, 9m88 also took special thoughts to add more improvs, such as songs "Inner" and "If I Could." The double bass player performed an exciting dueling piece in the song "If I Could" against the piano and also played "Valerie" with a wonderful pizzicato. But the most pleasant surprise occurred during her costume change when the musicians started a casual jam on-stage. The exciting interaction had a free jazz flow to it and made an unexpected highlight.

The night stopped at 15 songs. At the end of the show, many fans felt that the performance was too short and wanted more. The final two songs "Plastic Love" and "Do It For Love" were so relaxing that the audience started swaying to the music and the whole place transformed into a gigantic dance floor.

In fact, 9m88's attention to rhythms extended far beyond these two songs. Everyone at the show witnessed her superb singing and star potential. The most interesting part is finding out that she not only connects the visuals with music, but also to the body as well. She is special in the way that her music is able to draw out the rhythm in her Taiwanese audience, who is for the most part quite shy of moving to the music. This magical space is created not only by music and rhythm, but also through 9m88's stage charisma that is confident and at ease.