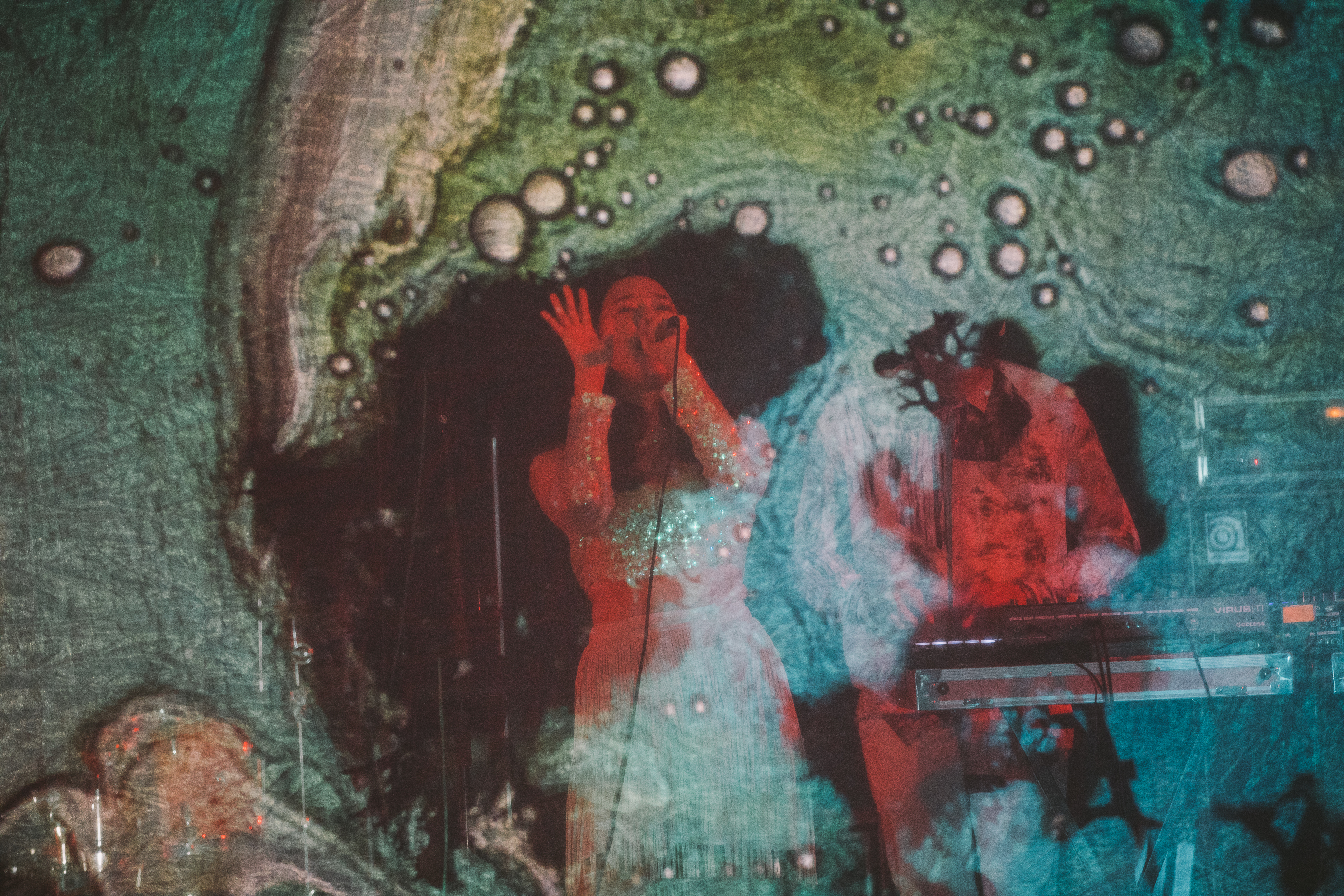 Entering its 25th iteration this year, Canada's NXNE not only saw the largest line-up this year, but also welcomed Taiwanese artists to perform as part of the pre-festival warm up show. Held under the name "Taiwan Beats" at the Toronto rock bar "The Hideout", the Taiwanese bands April Red, My Skin Against Your Skin, Queen Suitcase took the stage on June 11th, just in time to witness the Raptors' first NBA championship. The electronic duo April Red was the first to perform, with band leader DJ Code setting a mood of oriental mysticism as vocalist Shao Shih eluded herself behind a thin veil upon the stage. This particular performance was also supplemented by ink projection artist BIO and VJ Youji. The two artists not only provided a visually stunning companion to April Red's music by projecting on to the stage's veil, but also gave the audience the chance to experience a variety of beautiful settings: From that of a microscope, to a telescope gazing the stars. The performance could be described as both breath-taking and mystifying.

April Red performed several of their hits that night, including "Red City" and "Nude Model". For their final song of the night, April Red invited My Skin Against Your Skin's lead vocalist Andrea to join them on stage for a special remix performance of the classic Mandarin song "The Evening Primrose". This song is widely regarded in the Mandarin speaking world as an all-time classic, and the choice of this track was to invoke a feeling of home for those in the audience of Taiwanese ancestry. A far cry from the serenading emotions of "The Evening Primrose" , My Skin Against Your Skin took to the stage with blasting beats and Andrea's wild voice in full swing. Known for their frantic and sexy stage presence, this is the second time My Skin Against Your Skin has taken part in NXNE since 2011. As the audience began to dance along to their performance, the duo also decided to play a few songs from their latest album Andrea, not only impressing listeners, but also local musicians and music industry professionals. The last group to perform that night was Queen Suitcase. They decide to bring a guqin, a traditional Chinese string instrument to supplement their performance in Toronto. Their song "Up, Up, and Away" made special use of the guqin, combining western rock with eastern sounds. Many members of the audience were quite intrigued by the guqin, while Queen Suitcase's guitarist Hao Chuan Wu made the perfect analogy for everyone to understand the guqin: "Think of it as a Chinese slide guitar".

The Queen Suitcase set was comprised entirely of new songs from their latest album Directions from Above, which sounds not only modern and hipsterish, but also has a playful and dancelike tone to it. Some fans even flew all the way from Asia just to catch Queen Suitcase's performance. As the Toronto Raptors also won their first ever NBA championship the same night of the show, the bands were delighted to witness and be part of the city-wide celebration, which was a very special occasion to all involved.