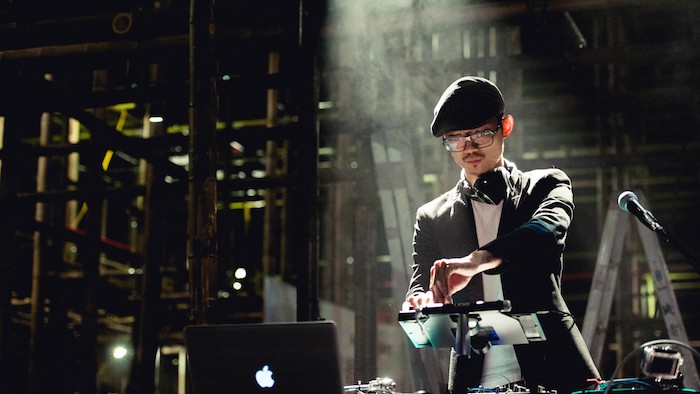 Not only is DJ QuestionMark an outstanding artist, he is also the impetus of the recent trend of vinyl renaissance in Taiwan.

Ying Chi Xuan, best known as DJ QestionMark in the music industry, was 2011 DMC Taiwan Championship and now a member of 告野家 and PROJECT APJ. He is also one of the initiators of the Spinbox, a record player fund raising project on ZecZec, which was successfully funded in only 8 minutes after launch. Among the projects he’s involved, PROJECT APJ is a music brand extension established by fashion designer Apu Jan. This Music-Fashion crossover has made its appearance on international stage, and became the one and only successful case in Taiwan. PROJECT APJ was nominated for Best Band in the Golden Indie Music Awards.

He started DJing from high school. Through an acting class he took in NTU, he was introduced to theatre scoring, which at the end inspired him to start a career in the music industry. Later, he started to create music for commercial, movies and even fashion shows. Very good at composing modern and romantic music, he tries to improve the quality of his music every time. Invited as an artist to attend i•dance Taipei, he combined music with modern dance and performed with both foreign and local musicians and dancers, including pianist Mike Vargas, contact improvisation master Nancy Stark Smith, and Ku & Dancers. In 2015, he produced chamber orchestra SEMIFUSA’s self-titled album, and was later nominated for Producer of the Year at 27th Golden Melody Awards.

During DJ competitions, he often needs to do the scratching techniques. Having released two vinyl records, he found out that lots of people have little interest in vinyl records because the cost of purchasing a record player is too high. With a view to revive vinyl listening culture, he and his friends even developed a simple and low-cost record player for the public. DJ QuestionMark’s performances reflect all his diverse background. With his sharp observation, laid-back beats and his entrepreneurship, he is definitely one of the most determined DJs now.