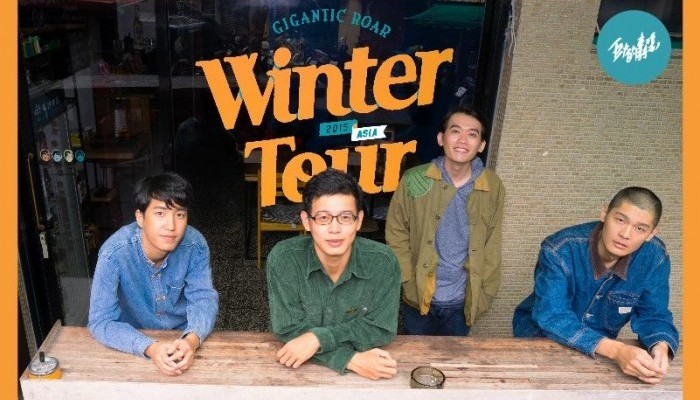 Interview with Gigantic Roar／Life is music-quoting Soft Lipa: “As long as you’re alive you won’t be without inspiration” In the spring of 2012 a couple of big guys hailing from Kaohsiung came to Taipei to study, bringing with them a passion for music and so “Gigantic Roar（巨大的轟鳴）”, a band of a couple of 20-something year olds came together. Not even having been together for four years, and even taking a half-year break in the middle, they have already caused gigantic roars with their appearances at the “Gigantic devil rock”, “Wild stage performance” and “Big Street performance” festivals. This year, along with ChtoniC, Trash, Wang Yu Jun and the time band, Fire Ex and Eiji Kadota（門田英司）, they have once again been nominated at the golden indie music awards for the “Best Live Performance Award”.

Their first composition “Climbing up the Birdy Tower”’s release grabbed many eyeballs, with a song title and half of the song lyrics using the poetic works of Tang dynasty poet Wang Zhi Huan. In the later half of the song, it sings of completely opposite emotions; “Don’t enlighten me, let me be an idiot”. Not only did it cause waves at the 30th Golden Melody（金旋獎）, but it even successfully used crowdfunding platform FlyingV to gain the chance to release their own album. This time we used the opportunity of the upcoming Golden Indie Music Awards to interview three of Gigantic Roar’s big boys.  Guitarist Jing Han was unable to attend, but specially asked the band to pass on a few of his answers.

◎Once you knew that you were nominated for this year’s Golden Indie Music Awards under ‘Best live performance’, what were your feelings?

Tang Xuan: Because we are usually busy, so when I saw it I just thought to myself ‘Oh really! Good! Ok!’. But if we are talking not about the feeling I had in that moment, I felt that being nominated was a very happy feeling for us and those who worked with us, receiving an award and being nominated is the biggest repayment for those who have been supporting and waiting for you, we just wish to be the best at what we do.

Jing Han: Being able to be nominated for best film editing allowed me to show my respect for “Tang Xuan’s band”. (Laughs)

◎From the first work until your newest album what kinds of changes were there in the musical compositions?

Zhi You: Previously the stuff we wrote was more simple, shorter, but for this new album the composition process came from a prototype that we came up with during band practice and recorded it down on our phones. Afterwards, I’ll go home and slowly write it/ Of course what we mostly write about is life, just more and deeper.

◎Let’s discuss the theme and concept of your new album!

Jing Han: This is going to be a very eclectic album, actually it shows the ability of each of us to imitate different genres through a bottleneck.

Zhi You: But for real this time, this album is a very honest record of life, noting down everything that we have faced this year.

Tang Xuan: It is a work that uses a very strong first person perspective, some people use the third person, but we really use the first person perspective a lot, using this view allows everyone to more quickly and more easily tap into the emotions. Although some of the song lyrics may seem dumb to others, but after you listen a few times, just like the movie "The Assassin" you need to listen more than a few times before you will start to change your thinking.

(Pai Di: But the last time I went to see “Jurassic World” for the second time, my feelings on it were still the same. Ha~)

◎When you have no inspiration for composition what do you do?

Pai Di: Probably listen to music. Actually I will still force myself to write it down even if I’m stuck, pushing my boundaries to find it, never just wait for inspiration to come before you begin creating.  Even if I only finished a little bit today, one, or two melody lines even, but these could possibly be very important elements in a future song. Gigantic Roar starts to record their new album from this Oct. Photo courtest of Gigantic Roar.

◎What small habits do you have before going on stage?

Pai Di: Start planning when is the last time I can go toilet…

Tang Xuan: Before I go on stage I will do five minutes of deep breathing exercises, in the five minutes it allows me to regain a very focused mental state. Relaxing muscles and adjusting breathing, this allows me to be less nervous, and at the same time allows me to pull myself back from all the things I am doing to just focusing on performing.

◎If you meet audiences which are very impatient while performing what will you do?

Pai Di: No matter about the fans or anything else, when on stage the things we try and express to them usually don’t change much, so we actually don’t really try to pump the fans up.

Zhi You: I don’t feel that interacting with the audience is part of my job, I feel that my responsibility is just to increase the standard of performance.

Tang Xuan: Of course if the audience are happy, the performance atmosphere will also be infected, but we still try our best to not be influenced too much by the audience, this seems to be the best method.

◎What do you parents think of you forming a band?

Pai Di: My parents support me, I think this is pretty good. My mother really loves music, other than coming to watch our performances, she will even actively go and watch other bands’ performances too.

Zhi You: My mother’s idea is just this, hoping that I will finish university, but I feel that this conflicts with me wanting to play music. Of course we do communicate, and at the beginning she was very sad, but afterwards she slowly got used to it. At the same time, I am also communicating with myself, should I keep studying, should I keep going to university, how should I choose? Although my mother didn’t specially choose to support me or not, but will still take my bank book to tuition, ask me if I have money for food…(Editor: When he said this, Zhi You choked a little, and accidentally saw tears swimming in his eyes.)

◎What are the future aims and direction of the band?

Tang Xuan: We hope that our output value grows, so that everyone’s life won’t be so terrible, I don’t want to be a millionaire, but I hope that at least I can survive. Of course wanting to start your own band has a scope, don’t be signing a labour declaration at the very last minute!

Pai Di: If we can solve these economic issues, then we wouldn’t need to compose songs halfway and then go to the public payphone at convenience stores to make phone calls. (Tang Xuan explains that it’s not that Pai Di’s phone can’t call out, it’s that it can’t be picked up, it’s a empty number. Laughs~)

Zhi You: Composing needs time, but if time is taken up doing other things, if I still need to waste time worrying about life, then I will be unable to 100% focus on creating music.

Pai Di: Actually the most important thing is that everything starts out from the music, don’t need to talk about the scope of  bands, how many people come to see your performance, before all this, what you need to think about is: “What is the next musical challenge?”. Some people say that their live performances are shocking and manic, some people say that their live performances are always crazily sung and played to break through the clouds. Every person in Gigantic roar has their own place, Lead singer Zhi You chose to temporarily stop school in order to put everything into creating music; Bass player Pai Di also was unable to pay his phone bills for many months; Drummer Tang Xuan who is in charge of managing the band and administrative services, just wishes that as an independent band they will not need to worry about food or clothing.

Being an independent and student band is especially hard, but just listening and watching their live performances your passions will more or less be ignited by their music. If you too wish to experience their brand of hot performance, then don’t forget that Gigantic Roar will be holding a nine-stop winter tour.