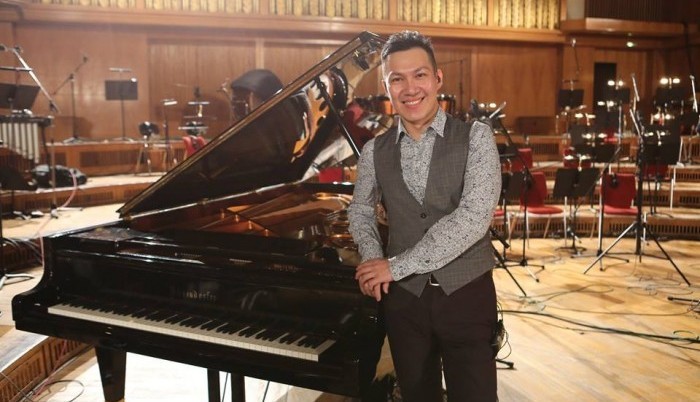 ‘This album ‘Zinnia Flower’, I feel that it has very important emotions, this is not sadness or sentimentality, but is release.”-A-gong

Director Lin Shu-Yu’s newest film ‘Zinnia Flower’s Stone and Karena Lam to act as two individuals who were involved in the same car accident and lost their partners; Yun-Wei and Xin-Min. Both of them embark onto a journey of avoidance to confrontation that spans over a journey of 100 days, before the movie was even officially screen, it had been nominated in three categories for the Golden Horse awards.

Xin music has also specially interviewed the movie’s music arrange A-Gong; to him, no matter in a band or in his own arrangement works, although the creative methods are different, but both sides allow him to express himself fully.

Q1: I remember A-Gong saying previously on Facebook: “Recorded my music sometime during this year, and I too found a part of my diary inside.” So we want to hear you share about the feelings that “Zinnia Flower” gave you.

When I wrote those words, on one hand I was busy with Sodagreen’s new album, and actually from November last year had already started writing the strings arrangement notation, and all the way until  January this year that was when I met Lin Shu-Yu, and after I saw “Zinnia Flower”, soon after began producing a film score. After finishing this, it was back to the production of our album. So its equivalent to the space of one year that I am constantly producing new ideas and music. In this relentless period, one of the parts was arranging the music for “Zinnia Flower”. I feel that this is a very hard-to-come-by opportunity, because in the past it was possible that after having a period of no creation for a while, then I will have new creations to be released, ad possibly would also rest due to promotional activities.

This year its rare to find that I am persisting in playing the piano, creating and so when I think back to January till April when I was arranging “Zinnia Flower”, actually it was a little bit like I was dreaming. Because "Zinnia Flower" music is completely unlike my personality, it is a film which is more serene, and so the music also has to be very quiet, every time when I am doing any sort of arrangement, I must first calm down my feelings. I feel that in those few months, other than creating a lot of different music, for my it was like I was resting, but at the same time bringing new works to life. Looking back on that, it actually was quite a valuable experience.

Q2: So when you are producing or arranging do you discuss with the director a lot of specifics in the music?

The day I met the director was the day I went to see the rough cut, at that time the film was about two hours long.

And then the director did put a little bit of music on, possible it was some songs or something…, just putting it in the film. SO from the start when I saw it, I could already understand the style of arrangement the director wanted, but in the process of producing it we did have a lot of discussions.

Q3: So after arranging it did it change the rhythm of the movie at all?

Because according to what I knew the film went from two hours down to 95 minutes, so actually on the directors side he did made big changes. In my head now I have two versions, the long version has a slower and warmer pace, and I have more time to think about the music,  at the time when I saw the long version, I already had a feeling for the melody. After that looking at the short version, which had been edited, overall the pace was slightly faster, with some scenes turning into totally different storylines which are moving forward simultaneously.

So, after producing it, it was more frequently that I met with little adjustments in the specifications; when the film and the music needs to work together it must be quite precise, perhaps there is something that needs to be kept in, something that needs to be released at a certain time.  The director clearly changed a lot of things, I didn’t change the movie because of the music, or it was the editing of the film combined with the backing arrangement.

▼The theme song of "Zinnia Flower"

Q4: Even with the scene following the end of the music  you didn’t change anything like that?

Yes. And then I felt that what was interesting about the process was that I also put in a little bit of my input, like if there is a scene where the female character Xin Min and her fiancee’s brother were embracing and crying at that period, from a normal emotion in order to bring out this emotion more, we created music for that entire section. But because during the film I often look for the actors’ expressions and feel that their expressions make me feel even more than my music does.

So I instead added a little bit of blankness in the music; my music isn’t just going throughout the entire film, but contains certain periods of blankness, allowing the expressions of the characters to catch the attention of audiences, before adding the music back in. But this situation required very specific discussion with the director, perhaps the director wanted blankness at places I didn’t, there were many of these kinds of discussions.

Q5: So your arrangement used classical music to express all this?

The arrangement was composed by myself.

Just as I previously said, the entire film has a quite relaxed, stable pace, so the music’s speed isn’t fast, except for several parts which used classical music, Chopin’s music speed is rather fast; but other than that the melodies I used were slower and more flowing. I think that this film is naturally very intuitive, changing perspectives I felt that I myself might also have this kind of reaction, so I use a very fluid melody to express this emotion that is very much like intuition.