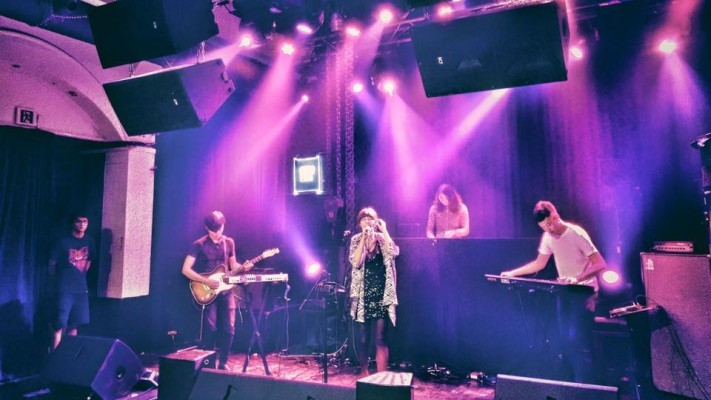 The Girl and The Robots performing at PIPE. Photos from PIPE Live Music's Facebook page.

◎How did you find out about this venue (PIPE Live Music)?

Tung: A friend recommended it. This venue is situated within the Taipei Water Park, it served as a pumping station a long time ago and is now a historical site. The station was built in 1964 and ceased operating in 1977. Seven years ago, it was restored as a historical site and managed by an outsourced party, the site has a ceiling height of 8m and spans 214.9m2. Although close to Gongguan Station, you've to walk quite a bit to get there, which makes it a bad location for restaurants. Some people have even attempted selling stuff such as betel nuts, beverages and fish products. The place was later turned into a scenic restaurant that eventually ran into financial difficulties due to its inconvenient location.

When I arrived here four years back, I found it to be the natural spot for a studio given its reverb qualities. So I tried to use it as a recording studio and gradually developed it into a live house. Its location proved to be advantageous since it was far enough from residential areas to not attract noise complaints, yet within walking distance from the metro, making it one of the few examples of a historical site and pumping station that was successfully transformed into a performance venue.

Tung: It was a pumping station, hence the name PIPE. You can still find pumps and large water pipes here, it's an interesting place.

◎Live houses are tough to manage in Taiwan, how did you manage it?

Tung: We were in the red for the first three years and couldn't do much in terms of equipment. As the Taipei City Government had been trying to cultivate live houses in the past two years, we received some funding which went towards site repairs. We are also gradually moving into electronic music, organizing parties and attracting a more vibrant crowd.

These days in Taiwan, it's a tough environment for band performances. Performers don't get paid a lot, audiences are dwindling, and the government has imposed many legal restrictions. This is indeed a hard industry to grow.

◎On the PIPE Live House website, you can find performing groups from different music styles and genres, including bands, electronic music and hip hop. How do you select these groups?

Tung: I hope that PIPE can offer musical diversity. It's most important that we attract young people, so all forms of music are welcome. It's like a market with a good selection of products. What's important is that your performance offers a unique experience for listeners. There is no point in placing restrictions, good music is what matters.

◎Are there any requirements with regard to venue rental? Or do you simply accept anyone?

Tung: Beggars can't be choosers. This was the case earlier on when we were facing operational difficulties. Nowadays, for bands with poor performance standards, we would communicate with them on how they could improve. A young band's music might lack maturity, but we've to give them the opportunity. What's important is that they improve and learn from their performance. We also have special deals for student bands since performance venues in Taipei are becoming increasingly expensive to rent, and this has limited performance opportunities for many bands. PIPE cannot follow this trend, because the young must be given opportunities.

◎Has your experience from Luantan helped you in this business?

Tung: To some extent. Everyone knows your background and respects your music credentials. They also recognize that having a music professional to manage a live house is the only way to retain some semblance of idealism. If everything is seen through commercial lenses, a lot of potential in the music scene would be overlooked.

◎China boasts many famous live houses like Beijing's Yugong Yishan, Shanghai's Mao House and Chongqing's Nuts. Have you been to these places? If yes, what are the differences compared to Taiwan?

Tung: It's comparatively easier to operate in China. Their consumer population is so much bigger than Taiwan's, even a small crowd is of considerable numbers. (Note: Some major Chinese cities like Shenzhen, Chongqing and Guangzhou have populations half as big as Taiwan's) Here in Taiwan, the focus is diversity in music to attract more people. It should also be pointed out that China's live houses do not have as long a history as Taiwan's, which have been in existence for more than 20 years. The live house scene in Taiwan is therefore more mature and accepted by the people.

◎Did you observe any differences between the development of music in Taiwan and China?

Tung: The level of professionalism and quality is relatively higher in Taiwan, but China is learning and growing faster, so each side has its own strengths. Market size is still the biggest issue. Taiwan's music professionals and talents still have an edge over China's, but the size of Taiwan's market means that many Taiwanese professionals have to move to China to survive, making these two markets complementary to each other. Taiwan must remain vigilant though, after all, China learns fast. The government must help to support music development here, or the loss of talent and funding to China will soon land Taiwan in a crisis.