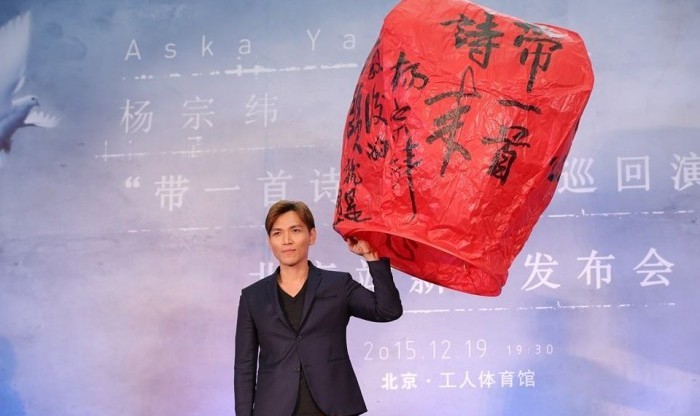 Aska Yang started his singing career after joining the first “One Million Star（超級星光大道）”.  He released his first solo album “Dove（鴿子）” in 2008 and joined Universal Music（環球音樂）in 2011, which gave him the opportunity to have his second album “Pure（原色）” made by Jonathan Lee（李宗盛）, the God father in the music world.  In 2013, Aska Yang joined the singing competition“I Am a Singer（我是歌手）”which was broadcasted on Hunan Television（湖南衛視）in China.  Winging the third place in the competition, he was under the spotlight again and he then grabbed the chance to release the third album “First Love（初.愛）”.  This year, Aska Yang’s world tour concert “I’ve Brought a Poem to You（帶一首詩來）” will start in Shanghai on Dec 12th and he just released the first single of his fourth album “Sky Lantern”.

Produced by the famous musician Chen Chien Chi（陳建騏）, “Sky Lantern” is a song about one’s enlightenment of life after having learned from the heartbreaking memories.  The lyrics “The people whom have been let down, are you still waiting” reveal the reality everyone needs to face today ─ at some moment in our life, we all feel that we’re the one being let down; on the other hand, the other lyrics “I think it can still prop up your warmth for the future” is about everyone having the hope to meet the warm one.