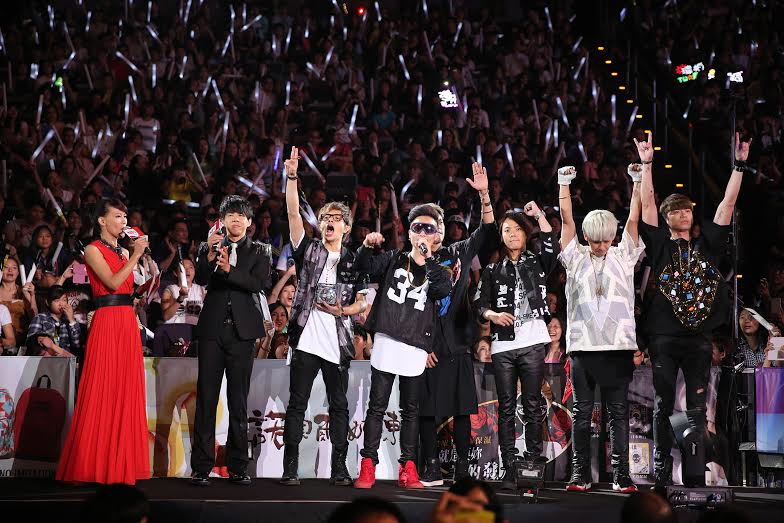 From the first album “Magic Power” released in 2009 to the 4th album “Fighting for Love” in 2014 and also their first concert held in Taipei Arena, Magic Power has gained great success. This year, the album “Fighting for Love” was nominated the Best Group by 26th Golden Melody Awards, and also awarded three prizes in 2015 HITO Music Awards. In June, Magic Power represented Taiwan to participate in MIDEM in Cannes, France. Beside enjoying sunshine and the beach, they also brought their best 50-minute concert performances to France.

This time, Taiwan Beats invited them to talk about their music.

◎What are the transformation and adjustment during your career?

We joined in B’in Music soon after the six of us grouped together and then released our first album. With different music tastes and genres we had in the past, we are always finding our mutual understanding in music throughout the past four albums in 6 years. It was until the 3rd album “Marksman” that we acknowledged that the music genre of Magic Power is electronic. That’s why there are lots of electronic elements in this album “Fighting for Love”.

◎What do you want to convey through your music?

We want to convey some “positive thinking”. Most of our fans are high school teenagers, and they might be rebellious against their teachers or parents at their young ages. On the other hand, teenage-fans may comply with their beloved idols. Therefore, we make it possible to tell them the right things when making music, performing on stages, or speaking in public.

◎How do you feel about representing Taiwan and performing in MIDEM?

Before MIDEM, we already performed in other countries, such as Taiwan Cultural Festival in Canada, and also toured in some campus in USA. But this time in France, we know there will be professional musicians, music companies, and music managers gathering in this festival. Therefore, we will come up with some new ideas in our show.

As for the upcoming concert cooperated with Canada Cultural Festival, the performance is also a pressure for us. In Canada, we usually performed for free. But this time, we will sell tickets. As a result, we’ll make it to the best and possible bringing our stage lighting and performances to Canada.

◎What are the difficulties when performing Superhero (English version)?

Everyone writes songs every now and then, and Tin is the most productive. He usually writes some English version first, which makes our boss considering releasing English single or album whenever planning to release another new album. And that’s how we got <Superhero>.

On the other hand, we notice that lots of foreigners attending music festivals in Taiwan nowadays. Though they can easily accept our music genre, if we can connect our story with English or other languages they are familiar with, they will have stronger intimacy with our music. That’s the reason we want to perform English songs to promote our music.

When we were making album, it’s not easy to actually sing like native English speakers since English is not our mother language. In this way, we have to practice a lot, especially on pronunciation. And the fast way is to imitate native Americans in singing and speaking.

◎Who do you want to work with?

Recently, we are making some English songs. Therefore, beside Jolin Tsai, we would really like to work with some famous American producers. And hoping we could travel to America, Japan and other countries to record or make albums in different environment.

Actually this happens to be the same purpose when going to France. MIDEM is a music festival, there are various kinds of music genres, especially those European DJs. In addition to perform in the festival, we also want to learn from them.