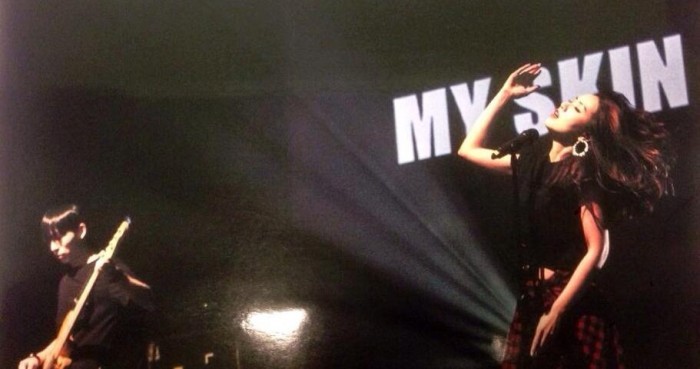 My Skin Against Your Skin（激膚） is like no other band. The band was formed in 2010 by just two members, vocalist Andrea Huang and bassist Si-Lu Yu. The pairing of a sultry female rock vocalist with bass and drums is what gave My Skin Against Your Skin its unique psychedelic and garage rock revival style. After performing at NXNE in Canada in 2011, Angela Huang was hailed as a natural-born rock star by the Canadian media, for her ability to draw people into her music with her live performance.

My Skin Against Your Skin was named after an Yves Saint Laurent short and released its first single "Jealous Lover／DirtyBabe" in 2010. The band was later invited to perform at various local and foreign music festivals. In 2012, the band released a self-titled EP which earned them the Best Band, Best Rock Song and Best Musician awards at the 3rd Golden Indie Music Awards, as well as a nomination for the Best Band award at the 24th Golden Melody Awards.

The duo represented Taiwan and performed at the Midem music trade show in France this year. For its special performance, the band fused its music with lines from a Chanel film. Taiwan Beats is taking this opportunity to interview them, and have them share their thoughts on their music, as well as their most memorable experiences after performing at a number of music festivals.

◎How would you describe My Skin Against Your Skin and its music?

Andrea: I would describe it as being a bit surrealistic. It’s interesting how we create our music. Since we're big fans of science fiction movies, we would often imagine our music as the main theme or background score of a movie, and this gave us the inspiration to create music.

◎What do you wish to communicate through your music?

Andrea: I think creative works rely on imagination, and we believe we're doing something meaningful by inspiring the imagination of listeners through music. ◎What were the most memorable or interesting experiences during your tours?

Andrea: We were pretty lucky and very grateful for the many opportunities we had to perform and learn overseas. Our first trip to South Korea was the most memorable. At that time, we only knew about South Korea through K-pop and were not familiar with the audience there. We were concerned that they may know next to nothing about rock and other forms of music, but we later realized how accepting they were the moment we stood on stage, this overturned our initial assumptions.

◎If you could put together a concert or music festival, how would you do it?

Andrea: I'd base it around movies genres like science fiction, horror, comedy or black-and-white films. It will be such great fun, although I wouldn't require performers to dress to fit the theme.

◎Anyone you would love to work with?

Andrea: I'd love to work with an American rapper. (But if you’re talking about a historical figure) Marilyn Monroe or John F. Kennedy.