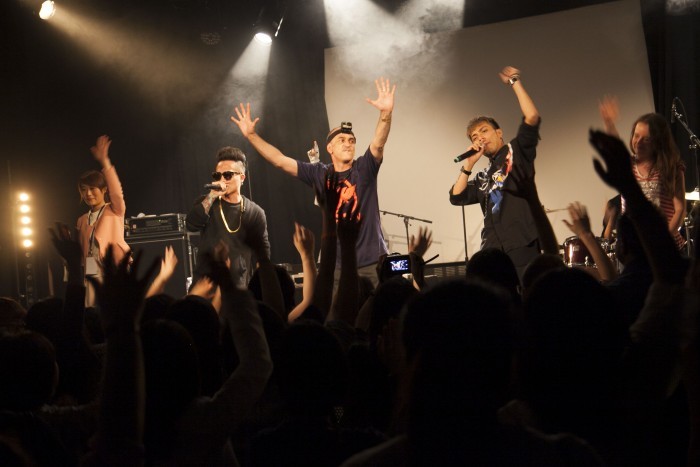 Presented by Taiwan Bureau of Audiovisual and Music Industry Development (BAMID) of Ministry of Culture (MOC), and organized by GCA Entertainment, the Taiwan Beats Showcase artists still had plenty of media interviews even with such a tight schedule.

During an interview, Magic Power expressed their surprise to find fans in France, let alone in Cannes; those young French fans even made band name signs to cheer for them. Even with the language barrier, they still felt admired by the fans, which was very touching. Magic Power is currently working on their English album, hopes to establish a even better interaction with non-Mandaring speaking audiences. My Skin Against Your Skin（激膚）

My Skin Against Your Skin expressed their gratitude towards BAMID, for all the opportunities to attending several international festivals in recent years. Performing at these international events have widened their perspective, which definitely has given them lots of influences and inspiration on producing new songs. They hope other Taiwan bands will get similar opportunities to broaden their horizon.

Miss Ko, on the other hand, had some emotionally obstacles to deal with, since her luggage disappeared while flying in to Paris from New York City. She had to go shopping for a new wardrobe for a stay in France; however, she received the good news right before she went on the stage for the Paris showcase, and was finally able to put everything behind for the final showdown. At 20:00, Taiwan Beats Showcase at Paris had the privilege to invite Ambassador Michel Ching-long Lu to do the introduction via his famous puppet show. The rising star Miss Ko started with her jazzy groove funk beats, the crowd fell in love with her right away. Her easy-goingness, onstage outspoken personality and the native English ability quickly loosened up the crowd, especially when she was singing her first hit single “Slide”, everyone was doing the groovy dance with her. Miss Ko not only gave the crowd a taste of new generation hip-hop, but also gave everyone an entertaining and fun time.

The night went on with My Skin Against Your Skin’s astonishing synthesizer music. DJ/bassist/synthesizer programmer – A Lu was as cold as ice, lead vocalist – Andrea was rocking and dancing the night away; the two complete opposite style of outlook created an extreme contrast which brought out a visual tension to go along with the futuristic and upbeat style of music. Last but not least, Magic Power no doubt was the crowd-favorite, the venue was filled with loud screams during their entry. Although known to be the future successor of the Asian superband Mayday, Magic Power has its own style with the addition of electronic DJ and duo vocals. Their great onstage personality, interaction with the crowd, and body language all proved that they are the next superband. The night ended with Magic Power inviting fans and TTV reporter onto the stage to do the Marksman dance with them. Although the crowd cheered encore for more, but they had a great wonderful experience with Magic Power.

Music is one of the universal languages, but Pop is the easiest to understand. These three Golden Melody Awards participants showed the world that even though music genre and style maybe similar, but different culture and life experiences can influence one’s creativity. They are all singer-songwriters or composers that’s extremely dedicated to their music and belief; Mando Pop’s new generation certainly deserves world’s attention.