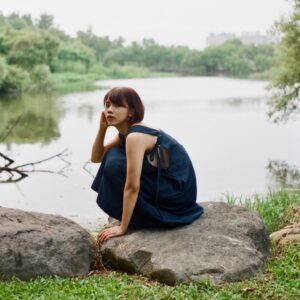 Hailing from Taipei, Zoomie is a solo singer/songwriter with a gentle voice and touching lyrics that accompany her ubiquitous acoustic guitar. Her musical journey began as a teenager, writing melodic folk songs in both Mandarin and Hakka languages. Zoomie has toured all over her home island of Taiwan playing festivals and smaller gigs, spreading her music, and making a name for herself as an expressive young talent. Her signature voice and songwriting ability make her stand out as part of the next generation of folk singers.

For her 2018 debut album on A Good Day Records, Renewal for Your Life, produced by renowned singer-songwriter Easy Shen, the sessions added instruments like electric guitar, a horn section, electronic drum loops, and backing vocals to bring even more depth to Zoomie’s heartfelt songs. The studio production just enhances the acoustic stylings to give it a unique edge. In 2019, she won first prize for her live performance at the Taiwan Music Composition and Songwriting Contest and was nominated for Best New Artist, Best Folk Song, and Best Folk Album for the 10th Golden Indie Music Awards. Her latest release, 2020’s Taipei Recordings is a three-track EP from a trio of musicians, including Russy Ing on bass and Zun Long on drums. While still rooted in folk music, the EP has more pop and jazz influences to capture Zoomie’s progression as a singer and songwriter. It also feels and sounds more raw, since it was recorded live during a session at 112F Recording Studio in Taipei.