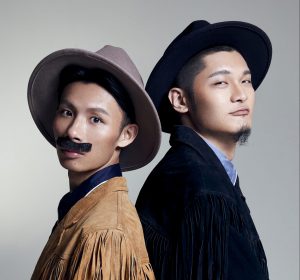 The first hip-hop duo in KAO!INC., Yeemao was formed by millennials Leo Wang and Chunyan in 2015. Their nerdy and loser spirit as well as offbeat personality is quite the opposite of traditional hip-hop figures and attracts the young generation. Leo Wang is a rap genius who raised his profile with the love song "Weekends with You" featuring 9m88, while Chunyan has collaborated with both KAO!INC. and WAR Convict Studio.

Childish but romantic, anxious but original, Yeemao's songwriting is all about the bizarre and unexpected. They use their characteristic chillness and craziness to win the heart of the millennials and Generation Z. In 2017, they released their debut album OwO and later held their first major concert "Yeemao: Grand Adventure" at TICC, a venue of 3,000 people.