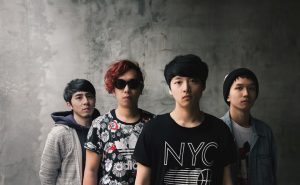 Founded in 2014 in Taipei, Taiwan, by lead vocalist Daniel Lu, Thick Big Band is a band that is heavily influenced by Western punk rock and skateboarding culture. The spirit of the band is to live life with a sunny and bold outlook, telling life and its many unpleasant challenges to “eat shit!” Thick Big Band has performed in live houses and music festivals all over Taiwan. Since launching their first single, “Unknown Planets,” in the beginning of 2016, the band has welcomed some new members — guitarist Zhuang Jian Long, bass player Chen Wei Ting, and drummer Pan Buo Hong — who have positively contributed to the band’s chemistry and charisma. In 2017, the “Shit Road” Taiwan tour established Thick Big Band’s reputation as a high energy and joy-inspiring live performance band.

In 2018, Thick Big Band launched their first album, Juicy Now. The titular hit track "It's Time" plainly voices a sense of disappointment in the past and the drive to live their best life in the present. The composition of the song breaks aways from the traditional linear progression of punk rock by incorporating different rhythms and rap. Famous English producer, Seb Barlow, mixed the song and rendered its dimensions even richer and deeper.