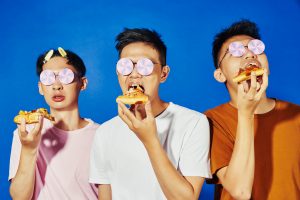 Coming into 2020, fewer bands in Taiwan have more hype behind them than The Chairs. Fresh off a 2019 win at the Golden Melody Awards for Best Vocal Group, on the strength of their second album, Lovely Sunday, the band, which takes pop rock sensibilities from the Chinese-language, Hokkien, English and Japanese  scenes had, after all, helped to spearhead something of a retro revival in their native Taiwan, among a host of acts with sounds hearkening back to the Taiwanese indie sound of decades gone by.

Devoid of the doom-and-gloom political and social commentary of some of their indie peers, The Chairs, like contemporaries Sunset Rollercoaster, for instance, prefer to focus on the good things life has to offer—pop’s answer to being all about that PMA.

The trio, consisting of Jin on vocals and guitar, Zhong (also on vocals and guitar) and bassist Benson, met during their senior year of high school, where they were members of the school’s guitar club. Later, they would go on to compete at the university level in singing/songwriting competitions, honing their craft in the leadup to the recording and release of their debut album, Cheers! Land, an LP heavy on the acoustic stylings favored in their competition days.

A period of turmoil followed, with members getting bogged down with the heavy reality of the so-called real world, Taiwan’s military service, the perils of getting a “real job” and the harried nature of graduate studies threatening to force the group to disband in spite of multiple nominations from the Golden Indie Music Awards. The Chairs were actually in danger of folding (sorry) when producer and fourth member of the group, producer Eazie Huang, came aboard, fostering new methods of collaboration between Jin, Zhong, and Benson, which allowed them to make time for music and for all the other obligations pulling them this way and that. The result of this turmoil, amazingly, was the cheerful vibes that permeate Lovely Sunday, a testament to the trio’s ability to see the light in even the darkest of corners.

Listening to Lovely Sunday is to take a trip back in time to the rock heyday of the sixties and seventies, when the Beatles and David Bowie melded the supremely psychedelic with the warm, relaxed, and folksy, the sound of the times walking the line between the melancholic troubadour Leonard Cohen and the edgy proto-punk pop rock of Lou Reed. Jin and Zhong take their turns as lead singers much in the same way John Lennon and Paul McCartney would back in the day, though John and Paul weren’t likely to bounce between singing in English, Hokkien, Mandarin, and Japanese, able to change tongues both literally and in the musical sense at will, choosing whichever best suits the song at that given moment.

Rarely do artists enjoy such a wide creative berth that has been hard-won by these stylistic polyglots, but that by no means makes their sound confused. Rather, it is focused—a light, vibrant, and decidedly local take that brings into the fold all the forces that have come to form their native land itself (the local, the foreign, and the colonial), melted down into a style that is purely The Chairs.