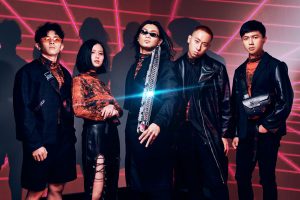 The Amazing Show came from Chiayi, a small southern city in Taiwan, and proclaimed themselves one "Low Tech Corny" band. They used traditional instruments with hand-made DIY ones and combined hard-rock, punk, folk, and experiment elements into their music.

The name of the band, Amazing Show, was inspired by the Mandarin pronunciation of the name of the lead singer's mother. The line-up consists lead vocalist Gobo, guitarist/vocalist Hsiu-Chi, keyboard Luis, drummer Kenny, and bassist Jennifer. Gobo has hoarse voice and can sing in various styles. As the mastermind of the band, he can rap a lot of Taiwanese slang lyrics in a fast provocative funny way, and also sing out the vicissitudes softly of those love songs. In 2016, he handmade an instrument called "Super Power Rocket" as his college semester project, and invited his high school fellows to perform with him. Instead of just a one-time show, it led to the founding of the band. Hsiu-Chi, another main songwriter, is good at merging various popular elements into an appealing melody.

Some music of Amazing Show reminds listeners of songs Wubai or Jay Chou wrote around 2000. However, their repertoire is more than just a collection of retro feelings. Coming from the small southern resource-lacked town, grass root feelings and vulgar fun are also important elements in their songs to reflect their growth background. Besides, Gobo has a talent for using low-fi DIY ways to manufacture special instruments. For example, the "Invisible 8" is an installation instrument which uses eight laser beams to control colorful lights and sound, and the "Super Power Rocket" combines synthesizer, effects processor, and rotating light box into one. In their live shows, while being surrounded by heavy rock guitar sound, the audience will also feel lost in the psychedelic light and sound effects. It seems like they are thrown into the cyberpunk world of the Ghost in the Shell, colorful but dangerous. This kind of retro-futuristic aesthetics, as they proclaim, is "from Chiayi to Galaxy".

In addition to the energized live performance, Amazing Show is also famous for creating popular power ballads, such as "Roll-Cigg", "Chill Out" and so on. They use cigarettes as the main image in these tragic love songs, and successfully arouse the concern of many non-indie-music fans. Moreover, the fact that "Roll-Cigg" reached eight million views on YouTube is one of the amazing accomplishments of Taiwan indie bands.

Just a few years after their formation, Amazing Show won the top prize in the Hohaiyan Rock Festival, one of the most important band competitions in Taiwan. In the same year, they released their debut album King of Light. The title song is a tribute to the craftsmanship. This album used crowdfunding for financial support. Besides the album CD, the rewards also included a small version of "Super Power Rocket". Amazing Show encourage the audiences use their smaller ones to make some noise and response to the large one on stage. This makes every performance unique.

The Amazing Show was nominated for Best New Artist and Band of the Year for the 30th Golden Melody Awards in 2019, cementing their reputation as one of the most remarkable indie bands in Taiwan.