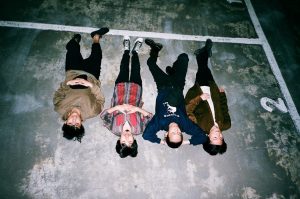 Reversing into Garage is a four-piece rock band formed in 2013. They have a love for old-school garage rock and D.I.Y. sounding music, which saw the band writing and recording most of their early material in empty warehouses with their phones. The band’s current lineup has Lyvon on vocals, guitarists Layne and Rong, and bassist Yujin.

While the band’s name is a direct tribute to garage rock, they also stubbornly refuse to admit that the golden era of rock music has ended. Vocalist Lyvon, who also writes most of the band’s material, was greatly influenced by artists such as the Artic Monkeys and Jack White. He prefers catchy riffs and melodies over virtuoso performances. This is also reflected in their musical composition, which favors simple but powerful arrangements over flashy segments. In terms of lyrical content, the band often takes a powerful and sometimes violent approach to confront the ups and downs and bad luck of everyday life. The combination of these elements sees the band’s overall style fusing garage rock with grunge, post-punk, and lo-fi.

2018 saw the band release their first album. The self-titled album also witnessed the band’s sound take a more concrete shape, with lo-fi vocals, a dry and bouncy bass sound, and guitar tones that deliver dirty and spacey power chords. The overall goal of the band was to send listeners to the downtrodden corners of society, while also delivering a punch of raw energy to everyone’s hearts and minds. The album went on to let be nominated for Best New Group at the renowned Freshmusic Awards in Singapore.

Although Reversing into Garage still publically claims they only decided to write and play music for the free booze and the chance to see other bands for free, there is no denying that they are one of the most talented and creative bands to emerge from Taiwan in the past few years. Even as the band continues have a stage presence that is fun and satirical, one cannot help to feel the sincere anger and helplessness in their music.