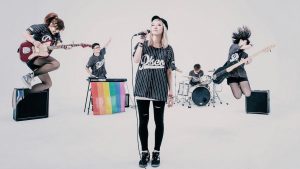 P!SCO performs in diverse music styles, it’s hard to put the band under any single definition since their music combines those different elements from rock, electronic, and classical music. Moreover, their non-stop performing style keeps the excitement throughout the show. P!SCO is the master of interacting with audience: from a simple gesture, shouting out slogans, to all-together-style singing with their audiences, P!SCO makes their audiences become participators of the show. P!SCO’s performing style, which is unprecedented in Taiwan, makes them the eyecatcher. They are nominated for the best live performance at 2016 Golden Indie Music Awards.

P!SCO constantly shows up in different music festivals. Apart from the live houses and other music scenes in Taiwan, they have also performed in Japan, Korea, Malaysia, Singapore, Macao, Hong Kong, Hubei, Guangzhou, and Shenzhen. Moreover, P!SCO has participated in Fuji Television’s filming and put their works on Japanese iTunes.