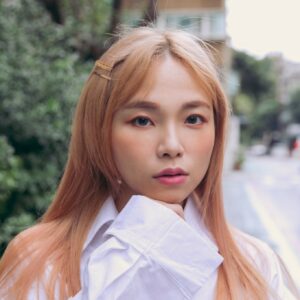 PiA is a singer-songwriter and guitarist whose songs convey daily life struggles with a touch of humor. Her musical career started in 2010 when she began writing songs with her bandmate.

PiA's highly relatable lyrics have gained her widespread popularity among young adults throughout Taiwan. Her 2014 album Such Is Life was nominated in the category of Best Pop Duo at Taiwan's 26th Golden Melody Awards.

Furthermore, PiA has given a TEDxNCTU speech (about what? what was the reception?). Aside from being a regular in Taiwan's live music circuit, she has also performed internationally at shows in New York, Okinawa music festival, and tours through four major cities in Japan.

Her 2021 album Be Successful is her first project signing in Taiwanese. The album mixes elements of city pop, ballad, rock, with arrangements of electronic sound. Her characteristically bright vocals along with her mastery of acoustic guitar rhythms add new depth to the songs. Taiwanese songs usually show a woman's weakness. PiA writes from the perspective of pursuing life as a modern woman, giving a new look to Taiwanese songs and breathing new life