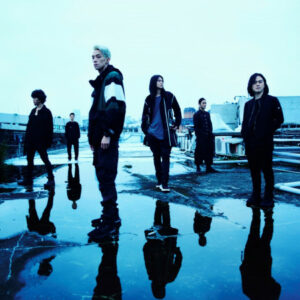 OVDS are a six-piece project from Taipei, breaking free from the rock band format with a boundless creative spirit fusing Hip-Hop, Pop, and Electronic music with the DNA of the group. Live performance lies at the core of OVDS’ music, criss-crossing similar-but-different, high-energy, and visceral experiences of modern club nights, heavy rock shows, and pop anthems. Fans won’t get an experience like an OVDS show anywhere else: a crazed electrified party with a live band rocking out in your face, all strung together like a DJ mix, with twin bilingual vocalists singing and rapping in both Mandarin and English, plus a VJ in the band crafting intuitive digital visuals live on the spot.

The origins of OVDS lie all the way back in school, when vocalist Gioreno and DJ/guitarist KITrust met at their music club. Later in college, they met bassist/guitarist HANN and drummer S.D., all bonding over a love of Western music – in particular Nu-Metal groups such as Linkin Park or Rage Against The Machine. It was a no brainer for Gioreno to invite his close childhood friend and rapper Kalis to join their new project: OverDose. As the band’s tastes evolved, so did the project. A passion for electronic music worked its way into the group, starting with industrial-bent projects such as Nine Inch Nails and The Prodigy and going on to include the likes of Chase & Status, Scooter, Moderat, and Burial. From 2007 through to 2013 the group augmented its Nu-Metal origins into the multifaceted electronic live experience of OVDS, where Trap beats, Dubstep bass lines, Hip-Hop raps, Pop refrains, and heavy guitar riffs combine into something entirely its own. The diversity, duality, and creativity of OVDS’ sound is closely connected to the thriving scene in Taiwan itself. Recent years have seen the country’s culture advance exponentially in the fields of art, design, and fashion – as well as music – the result of Taiwan’s exposure to vast global influences fusing with its many hungry and innovative creatives. Where OVDS come from, transcending cultural, language, and geographical barriers are now the norm, not the exception. It’s the biggest influence on the group’s chimeric mix of global genres, its Eastern-spirituality-inspired philosophy, and its forward-facing technological approach – leaving anything and everything possible. Much of the group’s sheer force and the vast range in its performance stems from their connection to a country in the midst of technological and cultural revolution. OVDS’ 2014 debut album, Heartbreak Resistance (plus a full album of remixes) saw them touring the U.S.A., Japan, China, and Europe and elsewhere for over three years of relentless and impactful adaptation to a wave of influences and experience. A 2014 show in Japan even led to the group collaborating with R&B star Koda Kumi. Energized by the touring experience, three more years of tireless work went into their next and newest album – 2020’s Black & Toughness inspired by the sorts of contradictions prominent in modern life and humanity, and well personified by the group’s own multiple personality disorder, blending languages, genres, and mediums. OVDS view the songs as depicting the contrast between dualism and family background – while family and upbringing remain the biggest influences over one's values, and dualism is the reality we live in.