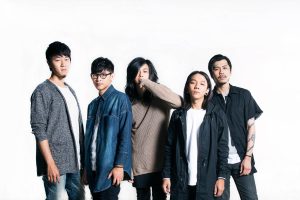 Mixer received one of the highest honors for bands in Taiwan, The Best Band Award at the Golden Melody Awards in 2014. Some band members had yet to graduate from college, and the members' average age at the time was only 24 years old.

The band is comprised of members from southern Taiwan, with vocalist Sheng Hao and guitarist Zi An being friends since junior high school. They went on to release an EP as the duo Zi An & Sheng Hao, which was when they brought on bassist Eno and guitarist Bosy as session players. Drummer Vincent, who at the time, had just recently completed his mandatory military service also joined soon after. The decision was made that if the band was to move to the next level, the band's name should just be a combination of the two original members' names. A new name was chosen by the five members: Mixer. The name meant Père David's deer in Mandarin, and the English name "Mixer" was adopted due to the close pronunciation of it. The band's logo was also created in the image of deer antlers, which was combined with a pair of hands to show how the band wished to uplift hopes and dreams.

During the next few years, Mixer would go on to play countless shows in Taiwan, many of them in the various universities scattered around island. These shows, along with their enigmatic and engaging stage presence, and lyrical themes that portrayed the struggles of young people, helped the band build a steady reputation through word of mouth online. Circus Movement, the band's debut album was released in June 2013, whose title track soon went on to hit one million views on YouTube. The band went on to win Best Rock Album at the Golden Melody Awards the following year.

It didn't take long for the band to capitalize on their initial success, releasing a second album Before Being Named in March of 2015. The album once again nabbed the band a Golden Melody Awards nomination for Best Rock Album. 2016 saw Mixer embark on an Asian/European tour, to promote their third album Wildlife; they were also voted online as one of the top ten Taiwanese indie bands of the year.

Musically, Mixer mixes a number of genres and elements, which gives them both a classic and modern sound. Lead vocals Sheng Hao bedazzles the audience with his beautiful long hair and deep voice, while electric guitarist Bosy layers out an array of sound textures with his effect pedals. Acoustic guitarist Zi An is the primary composer for the band, as most of their popular hits were written by him. In the rhythm department, bassist Eno and drummer Vincent play seamlessly along each other. The overall package that Mixer delivers is not just a contemporary rock band with classical sensibilities, but also the sound of a band that is well balanced and almost meticulous toward their craft- both in the studio and on stage.

Most of Mixer's creative inspirations come from everyday life in Taiwanese society. The tracks "Circus Movement", Roads Diverged in a Wood", "Going on the Stage" are songs that they wish to inspire those who are also part of their generation; while the songs "Strokes", "Little Child" and
"Someone" are stark reminders of the cruel realities of the human condition. Of course the band is not just about the doom and gloom, some of their more heartfelt tracks include "Hello", "Facing South", and "Sound" provide a more positive outlook for the band's catalog. As opposed to most bands that have risen to prominence in this generation of Taiwanese indie rock, Mixer is quite the oddity. While most other bands have chosen a creative path that has a more nihilistic approach towards lyrical themes and music tone, Mixer remains one of the few bands that want to give a voice to a generation of cynical and oftentimes helpless young people.