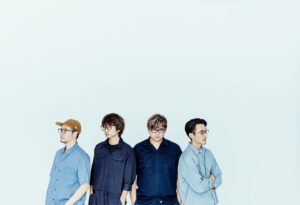 Major in Body Bear is an instrumental band from Taiwan formed by four guys who love J-Rock, Post rock, and improvisational playing. They replace human voice with catchy instrument melody lines and intricate arrangements. Besides the emotional and intense performance on stage, they create their unique atmosphere and vibe. Their first EP Topic 1: Confession released in 2017, Major in Body Bear conveyed a high intensity of playing by mean of every member recorded at the same moment. They drew a lot of attention right after the EP was released. After their confession, they build connection to each other through frankness and furthermore starting relationship. Different from previous EP’s first person point of view, in the album Topic 2: Relationship, using second person point of view, Major in Body Bear tried to build connection with
the listener by enhancing their music content substantially. The first revealed track “Chased in desire with bloody smiles” starts with ingenuously designed drum and bass fill, presenting the characteristics of the rhythm section, joined by their typical storytelling style with piano and guitar. The album was nominated for 2019 Golden Indie Music Awards for Best Rock Album.