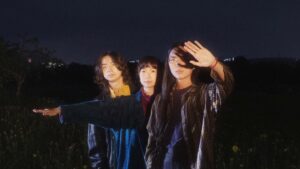 In 2021, after working with Sonic Deadhorse, a visionary producer who was himself a recipient of Taiwan's Golden Melody Award (GMA), Lilium released their sophomore album: Road to…. The album was a revolutionary new fusion of genres, blending styles such as Bossa Nova, Synthwave and Disco-Funk with the sounds and stories of Taiwanese traditional music.

Road to… won “Best Taiwanese Hokkien Album” and “Best Album Design” at the 33rd GMAs in 2022, putting Lilium on the mainstream map after years of rocking the Indie music scene. As their image and music have developed and expanded, so has their performance style: the former trio has expanded to a variety of different ensembles, inviting various instrumentalists and musicians to join them onstage and bring additional flavors such as electric guitar, synthesizer, flute, and live traditional Taiwanese pipes for their live shows.