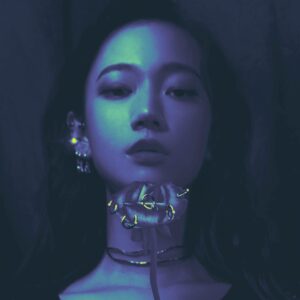 Hailing from Brisbane, Australian, Julia Wu has over 10 years of classical piano foundation and studied at Berklee College of Music in Boston, which cultivated her experience of live performance and
musicianship. She gained recognition in 2014 for her performance on the Australian show “X-Factor.” In 2017, her debut English EP @henry and debut Mandarin single “Under the Stars” were released on KKBOX, bringing a new style of pop R&B to the Taiwanese scene. When 1:28, her first digital album was released, the R&B infused collection of self-penned songs received positive acclaim from critics, radio DJs, and fans. Breaking tradition and keeping in line with her digitally based climb to prominence, her album was released as a limited edition AR book as well as a one year prepaid card for streaming platform, KKBOX, which featured her cover art as its design. She was featured in a cypher song celebrating Nike’s 35th anniversary of their Air Force One classic shoe. In December of 2017, she collaborated with Taiwanese rap impresario Kumachan on a chart topping songs released through Taiwanese hip hop label LongHuMen called “MyBong.” Her second album 1994, came out in 2018, and her latest of albums are a series called 5 a.m., 5 p.m., and 5:30 Rehearsals, released in 2019 and 2020. A new single featuring rapper E.SO, called “Better off Without You,” dropped in 2021, and shows Julia Wu’s consistent talent for pop R&B that appeals to a mainstream audience.