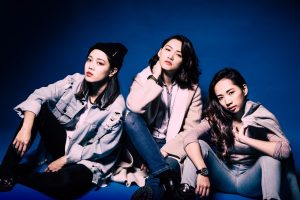 Formed in 2014, Jade Eyes is a female electronic trio, comprised of singer/bassist Ling Chin, guitarist Yi Hsuan, and programmer Yu Shin. Their 2015 self-titled mini album Jade Eyes was nominated for Best Electronic Album at the Golden Indie Music Awards, which is often viewed as the most prominent music award show for local indie artists. The album paid tribute to the early electronic music movements of Post-Punk and New Wave of the 70s and 80s, and also laid the foundation for their future creations, which would see these retro sounds, chanting vocals, and a mysterious atmosphere return.

Their unique music style soon led to invitations to perform at renowned international festivals such as SXSW and Canadian Music Week. They went on to release their first full-length album ADDICT in 2017, which saw them incorporate their new found philosophy of "living the moment" into their music. The bright and colorful cover art of ADDICT also symbolized the band’s more mature style, which saw them infuse elements of Deep House, Neo Soul, and Urban. The album led them to their second Golden Indie Music Award nomination, with the band being nominated for Best Electronic Album and Best Electronic Single. They were also nominated for Best Album of the Year at 2017's Abilu Music Awards, one of China’s most iconic music awards.

2018 proved to be another important year in the trio’s career, not just going on tour in Hong Kong with many of their label mates in Black Market Music Production, but also receiving a spot on Tencent Video’s "Rave Now" talent show. These endeavors not only generated many new found fans of their neon and misty music, it also helped the band gain greater reach in the Asian market.

Wrapping up a year of touring, Jade Eyes entered the studio to record more new material in early 2019. They are slated to release a new EP Crave in June. The first single "Virgin" has already generated quite a buzz on the internet, with both the track and music video throw conventions to the wind. Jade Eyes are feathering their old music and identity, while building a new aesthetic for both the band and music. Perhaps the most amazing detail of their story is: they’ve gone from a college student band and become one of Taiwan’s most iconic electronic music groups in a mere few years.