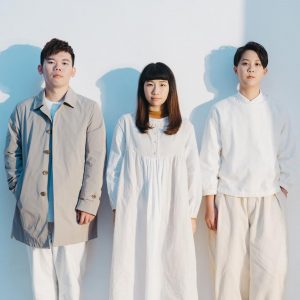 With elements of post-rock, shoegaze, dreampop and electronic music, Taipei's Huan Huan are one of a new breed of alternative rock bands hailing from Taiwan forging a new sound from a wide swath of old influences.

Taking their cues from peers such as Sunset Rollercoaster and The Chairs, Huan Huan's music is soft, yet resilient in its courage to acknowledge life's myriad uncertainties, using the power of song to heal the many wounds we suffer at the hands of the things we cannot know.

In 2017, Huan Huan introduced themselves to the world with the release of their debut self-titled EP. Featuring two-songs and a hefty runtime of 16 minutes for just a pair of tunes, the songs could loosely be described as soft-spoken, introspective, and ethereal meditations on the nature of loss in life, and the raw, visceral reactions those losses can evoke.

Songwriter Coco Hsiao (vocals/guitar) leads listeners through a decidedly evocative journey, the songs going by turns from reverb and delay-drenched intros of shoegaze to swirling tempests of jagged post-rock/noise rock emotional unburdening. There is a languid soul to the music of this EP, but beneath its seemingly still waters lurks a definite sense of power, and even menace, stirring below the calm surface.

In April of 2019, Huan Huan returned with another two-song EP, Charlie, debuting new songs from the recording at a sold-out EP release party in the Taiwan capital. The opening eponymous track explores the noisy, angular side of the band, hearkening back to the pure uncut days of noise when beasts such as The Jesus and Mary Chain loomed large on the musical landscape, bringing a much-needed edge to the pop rock/indie sound. The second track, aptly titled "Indiepop," is just as the name suggests—a bouncy, poppy, hooky take on the many ways in which we as human beings pursue the elusive beauty of life.

The world has begun to take notice of this one-time best-kept-secret of the Taiwan indie scene, the band poised to take its modern Taiwanese-style approach to the indie sound to Europe for the first time. Appearances are currently scheduled for March and April in both the Netherlands and Portugal. Currently, Huan Huan is recording new songs for a highly anticipated debut full-length album, slated for release in the summer of 2020. Having seasoned themselves on the club and festival stages of Taipei and cities throughout Taiwan, Huan Huan is a band ready to take the next logical step, onto the world stage.