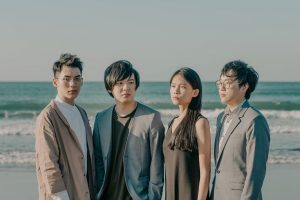 Hello Nico was formed by Yu-Ting Chan (vocals), Joshua Lee (guitar, synthesizer), Hsin-Po Chen (bass), and Jimmy Kuan (drums), in Taipei in 2013. The band has come to be known for its smooth blend of rock and electronic elements, as they are still one of only a handful of indie bands in Taiwan that have found success in incorporating electronic drums and synthesized bass into their music. As the primary arranger of the band, Joshua has stated in past interviews that the band's creative inspirations came from M83, Coldplay, and Phantogram, which also led them to seek a balance between catchy melodies and maintaining a sound belonging to them. These bands have not only influenced Hello Nico in terms of crating their unique band sound but also how various synthesized instruments came to become an even more integral part of their music's composition.

Live performances of Hello Nico have sometimes been called fanatical, with a level of emotion and energy that far surpasses that of their studio recordings. Yu-Ting's misted but meanwhile penetrating voice provides audiences an object that helps them force through the surface and dive into the world of humanity. The other band members assist with the buildup of sound and energy playing their utmost with instruments in hand, conjuring an unbreakable music shelter. Out of their released material of Hello Nico, tracks such as "Standardized City, Commodity, and Human" and "Blanche" exemplify the aforementioned qualities of their music most.

Even though Hello Nico's overall direction in music might not be an obvious choice for commercial success at first glance, the band has grown a dedicated fan base over the years. "Flower", a single off their first album Familiar Desolation has thus far been viewed more than 9 million times on YouTube. Another notable track off the album was "Wasteland", which was instrumental in helping the band generate publicity through word of mouth online. In 2016, the band went on to hold four solo concerts in Taiwan, all of which sold out within minutes, and they also received a nomination at the Golden Melody Awards for Best New Artist in 2016. Hello Nico has not only drawn support from Taiwan, as their performance at SXSW in 2017 earned high praise from NPR Music's All Songs Considered host Bob Boilen, who considered their set to be one of the biggest surprises at the festival that year.

As a band that has long proved that they are able to write music that dabbles in emotional self-indulgence and self-harm, their music has mostly been viewed as occupying the gray spectrum in terms of tone. Their newest single "Light and Dust" proves that they are not a one trick pony. A more light-hearted approach was taken by the band when writing the song, as evident with the track's vivid percussion arrangement and instrument tones that invoke a sense of positivity. "Light and Dust" was written as a reminder, hoping that one is able to seize the day and be confident in what the future holds. Hello Nico has developed a mentality towards creating music over the years, as they believe no matter how they shift in tone or genre, being expressive of their emotions is not the only reason they got into music; being there for their listeners come hell or high water, reminding them of the fragileness of humanity, and hopefully providing some sense of comfort and empathy is what they strive for in their musical journey.