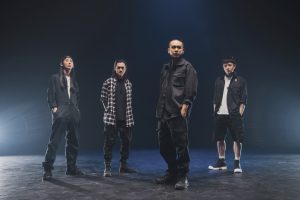 With the possible exception of Taiwanese folk metal firebrands Chthonic, no band has flown the flag higher for Taiwanese pride and Taiwanese independence than pop punk/punk rock stalwarts Fire Ex.

Formed in the southern port city of Kaohsiung, Taiwan’s Second City, the band has for two straight decades gone from strength to strength, penning one hooky, politically charged anthem after another, bringing to the fore of the music scene a sense of local pride their peers in the contemporary punk and rock scene struggle to match.

Known as much for their social activism as they are for their soaring, anthemic take on the pop punk genre, Fire Ex. band members Sam Yang (vocals, guitar), Orio (guitar), Pipi (bass) and Wu Ti (drums) have since forming in the year 2000 championed causes near and dear to the millennial generation of Taiwanese, from the independence of the country itself to making the case for the legalization of same-sex marriage.

Over the course of five full-length albums, the band has never shied from those themes both personal and political (for the personal is political) which strike a chord with themselves and the youth of Taiwan, spurred to action wherever and whenever a crisis may arise.

When the Sunflower Movement kicked off in in March of 2014, Fire Ex. penned what would come to be known as the anthem of the tens of thousands of protesters who surrounded Taiwan’s Legislative Yuan in opposition to a hastily-reviewed trade deal that would likely have seen Taiwan become ever more economically reliant on neighboring China, a country that has made its aggressive intent known to take Taiwan into its fold by any means necessary.

That anthem, “Island’s Sunrise,” further cemented Fire Ex.’s already unassailable reputation as a “band of the Taiwanese people,” one which isn’t afraid to stand up for themselves and their country. Protesters were already stirred by the band’s song, “Good Night! Formosa!”, renditions of which were heard throughout the halls and occupied grounds of the yuan, further adding to the legend of this Taiwanese institution.

Fast forward to 2019 and Fire Ex. is at it again with their latest socio-political power anthem “Stand Up Like a Taiwanese,” taken from their latest album, their fifth, of the same name. With a title and chorus ripped from the pages of real life (“Let me stand up like a Taiwanese” were the words spoken by a Taiwanese independence activist after an attempt on Chiang Ching-kuo’s life), the song is yet another in a long line of memorable punk/hard rock missives that have come to encompass the way the young of Taiwan (and as the band gets on, the middle-aged as well) feel about the future of their country and their identity as proud Taiwanese).

2019 also saw the return of the band’s own personally curated Fireball Fest, a two-day rock, punk and metal extravaganza at Taoyuan International Baseball Stadium with acts from Taiwan, Japan, and further afield all brought together by Fire Ex. along with some-odd 20,000 rabid fans. It’s just another in a long line of triumphs for this storied act that is no act at all—one which has seen them string together no less than six wins at the Golden Melody Awards, half of those along coming at the 29th incarnation of the GMA’s in 2018.

It’s not many bands that can claim to be at their strongest nearly two decades into their career. But Fire Ex., a band that can claim without hyperbole the title of “Pride of Taiwan,” are one of those few who can say so without having it come off as little more than the prideful boast of the elder statesman. Led by Sam Yang, Fire Ex. in 2020 are ironically a band that lights a fire under their fellow countrymen and women—a band looking to shine a light on their beloved homeland with their songs of power, protest, and passion.