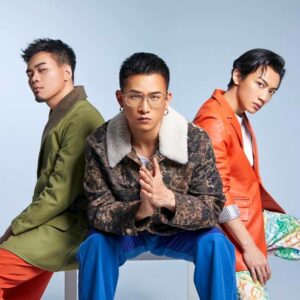 EggPlantEgg is made up of members Ki-pin Ng (keyboard/lead vocals), A-Ren Tsai (guitar/backing vocals), and A-Der Hsieh (guitar/backing vocals). In their music, humor is their armor and carefree words are their swords on the battlefield of both meaningful and trivial matters. They sing stories in Mandarin and Taiwanese Hokkien about beauty, purity, or ordinary life with a style that blends rock, electronic, blues, and pop. With sweeping guitar solos and catchy blues riffs, they belt out power ballads to explore relatable sentiments like brotherhood, growing pains and unrequited love. Since 2014, EggPlantEgg has progressed nonstop and finally released their debut studio album, Cartoon Character, in July of 2017. This earned them Golden Melody Awards in 2018 for both Best New Artist and Best Hokkien Album, and also got nominations for Band of the Year and Album of the Year. With roots from a college campus on the hills of southern Taipei, EggPlantEgg first hatched into the world as a band in 2012. These talented four musicians have conquered the stages of many major music festivals in Taiwan, such as Megaport, Wake Up, and Super Slippa. However winding their path has been, they have never lost sight of their belief, “Home matters more than love and music matters more than food. Everyday Life — it’s actually pretty good. At least we’re still alive and we still have our tunes.”