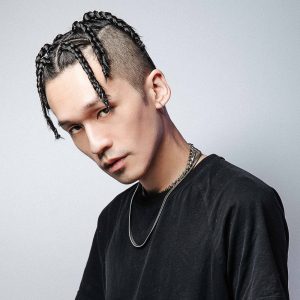 Known for competing in major international DJ competitions and performing in premium nightclubs, DJ GROUND won second place in both the 2015 and 2016 Red Bull Music 3Style competition, and is also a resident DJ at Taiwan's top-notch nightclub, OMNI.

After officially joining ROKON, DJ GROUND has continued to dominate at nightclubs and music festivals with his highly addictive music style. DJ GROUND, whose latest and greatest endeavor is producing, has launched his debut EP titled Highly Control. In collaboration with other artists and producers, DJ GROUND has created an EP that both fully manifests his unique style and resonates deeply with his audience. It is safe to say that he's one of the few DJs in Taiwan who are capable of creating such a sophisticated electronic music.

His first hit, "Miss DJ," boldly criticizes the inundation of inadequate DJs who are known for their looks instead of their talent. Featuring Savage.M, Sowut and JAYRoll, this unorthodox track uses a trap vibe and straightforward lyrics that pack a real punch when it comes to critiquing this highly disconcerting phenomenon.