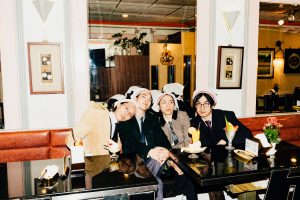 Indie, grunge, lo-fi—all have at some point been used to try and pin down Taipei-based indie enigma deca joins at one point or another. Since forming in the Taiwan capital in September of 2013, the band (whose name is a combination of the words “decaffeinated” and “decadent”) has gone about the task of making music that is by turns comforting and contemplative, then raw and emotional, songs running the emotional gamut from helplessness to hope, and from joy to mourning.

Formed at the Taipei National University of the Arts, deca joins began life first as FUBAR (Fucked Up Beyond All Recognition), before changing their name to Gray Dwarf Star, finally settling on current (permanent?) moniker in 2017. At first glance the name might seem meaningless, but it represents something of a revival/rebirth of the Gen X/Slacker sense of cynicism coupled with the perpetual optimist’s sense of hope. A contradiction, to be sure, but no one ever said deca joins had to stand for just one thing.

Since the release of their second album (the first as deca joins) Bathroom in 2017, deca joins has quickly gathered hype within the Taiwan indie scene and without, scoring opening slots for the likes of the UK’s Only Real and Homeshake (US) at Taipei’s vaunted The Wall livehouse, launching ground for most, if not all, of Taiwan’s indie, rock, metal and punk stars of the new millennium. The lead single, an eponymous track that is equal parts indie sonic lullaby and slow slacker pop anthem drew online eyes and praise from as far abroad as Canada, Argentina, and Spain.

A tour of Asia followed in 2018, after which the band immediately released a new EP, Go Slow, flying in the face of the slacker image because…well, why not? Another tour in support of the new EP was launched, spreading word about deca joins to new shores. On the strength of the release and the subsequent tour, deca joins’ video for the single “Wave” was viewed over 1.5 million times on YouTube.

2019 saw yet more accolades and accomplishments for deca joins as the band garnered a Golden Melody Award nomination for Best Music Video for the eponymous single from the Go Slow EP. This won the band a coveted showcase slot at the Tian Kong Music Festival in Kuala Lumpur, introducing the band to yet new converts from around the globe.

Capitalizing on their hard-won momentum, deca joins continued to make 2019 their year as they reissued both the Go Slow EP and the full-length Bathroom on vinyl, and then turned around and further spat in the face of the “slacker” tag with the release of a second EP, When Fog Dissipates. Yet another tour of Asia, this one given the grand title of “In Between Mountains,” rounded out what was easily deca joins’ busiest year to date, one which saw the band break new ground both in terms of touring and in evolving a sound—a slow-down-slacker indie pop movement—that they have come to claim as their very own.