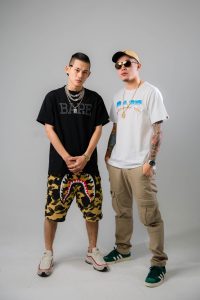 CaoTun Boyz, whose music is inspired by the lifestyle, Taoism and the gangster culture in their hometown Caotun, is undoubtedly the first name that comes to one's mind when speaking of localized Taiwanese hip-hop.

The hip-hop duo started producing music together back in 2009 when they were both high school students, but they only started enjoying fame in recent years. Caotun is a tiny township famous for growing rice in Nantou County in Central Taiwan. Bundy and Ec Ho grew up in the countryside speaking Taiwanese, they chose to sing hip-hop songs in Taiwanese, too. Instead of singing in mainstream Mandarin, they hope to represent the common people and put Caotun on the map.

Taiwanese is the main spoken language in Central and Southern Taiwan. Like many other artists did, CaoTun Boyz has chosen to write Taiwanese songs, because the language best expresses the thoughts an old-fashioned Taiwanese man would have and the working class's everyday life. Mainstream Mandarin songs, in contrast, are usually all about white-collar youngsters' metropolitan lifestyle. It seems to them naturally that only in Taiwanese can the listeners catch what they are trying to say. In their "Lethal Lover 2018", a namesake song sampled from The Chairman's "Lethal Lover", they tell the story of a Taiwanese man who rather leaves his woman than involving her into his pain and sufferings. Lethal Lover 2018 has more than 16M views on YouTube and has attracted a lot of fans. The Chairman is a well-known Taiwanese rock band.

Taoism is the most popular religion in Taiwan. The fact that Taiwanese culture has everything to do with Taoism has enabled CaoTun Boyz to lay much emphasis on Taoism in their songs. Bundy has danced the God's guardian "Guan Jiang Shou" (The Lead General) in Taoist processions for 13 years. Ec Ho is also a faithful Taoist. Both of them aspire to create rap songs for the younger generation to better understand Taoism and the Gods. "Pray to Xuan Tan Gong" is their very first song that got the duo famous on the Internet. Since then, they gradually gained popularity in other towns and cities. Fast forward to 2016, they sampled Taoist chanting and added Trap beats to finish the song "Shi Shan Guo Zhong Fu". It popularized with the youngsters even faster and received more than 6M views.

On the 10th anniversary, the boys have finally released their first album Ba-Bu-A-Kng, meaning the dawn in Taiwanese. The title implies that 2019 is the turning point of their music career. The album showcases a different side of the boys and their talent, consisting of various music styles. The hardcore rappers now have more "love me tender" Taiwanese love songs. "I Just Need Silence," a slow trap song, leads the audience into the boys' inner space and brings out a hallucinatory atmosphere. Hardcore rap song "Trap World" depicts the ups and downs of Taiwanese gangsters and the fraternity. Long Journey is about the boys' pursuit of dreams in the face of reality.

CaoTun Boyz has come a long way from the underground stage to under the daylight, from their tiny hometown to the whole country, from two high school students to performers who have over 10 million views online. They aced the Top 1 on Taiwanese songs billboard on KKBOX, the biggest music streaming service in Taiwan. The boys have brought Taiwanese music a step further and challenged the mainstream music producer and singers in the major cities. Two country boys from Caotun changed their lives by going hip-hop, speaking up to the world.