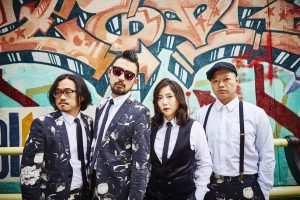 They proclaim themselves the worst band in the universe. In their almost 23 year career, they continuously use canonical attitude to write cult songs, and demonstrate the most furious aesthetics. They are 88balaz.

Founding in 1996, the meaning of the name in Chinese is "88 guava seeds," pronounced as "ba shi ba ke ba le zi." In the first place, lead vocal Balaz Lee wanted to parody the Chinese tongue twister "44 stone lions", pronounced as "si shi si zhi shi shi zi," and then derived the prankish name. Actually, 44 Stone Lions became the name of one of their albums later. Inspired by Guns N'Roses, Nirvana, etc., the basic music element of 88balaz is blues rock. They also use a lot of punk and noise guitar in their works. The rough, low, sometimes bursting out voice of lead vocal Balaz Lee is the indispensable scene during their concert.

From the second half of 1990s till the first one of 2000s, the rock band mania was flourishing in Taiwan. As one of the wave riders, 88balaz, relying on their live performing power, attracted lots of fans. Especially their performances in the two most important music festival, like the Woodstock or the Coachella, the Spring Scream at the south and the Ho-hai-yan Rock Festival at the north of Taiwan, means a lot to 88Balaz. Besides 17 consecutive appearing on the stage of the Spring Scream, in 2001 they excelled all the competitors, and won the top prize of the Ho-hai-yan Rock Festival.

After they won, many record companies tried to reform 88balaz to pop rock band, but Balaz Lee insisted they must retain the underground rebel identity, and then they refused many offers. The changing of the line up even affect their development. After the debut album Tsao Bao's Ambition was released in 2000, they finally got the ability to release the second album 44 Stone Lions in 2008 eight years later. Till 2012, they eventually have a stable line up. Now they are lead vocal Balaz Lee, bassist Kuan Ling, drummer DongYu Lee, and guitarist Bluez Lee. 2010 album Worse Than an Animal and 2012 album Handsome Than an Animal can be called their distinctive works. The former quipped the way of life of the band circle in Taiwan, and the later dissected the inner feelings of their work. The single "Handsome Than an Animal" described the struggling as musicians in a poetic way, and this not only made this song a classic among fans, but also let it become a must have in every concert of them.

The style of Balaz Lee is full of dark humor, and the lyrics are often unrestrained with many adult fairy scenes. In the same time, the abundant mysterious metaphors in the songs, such as "Viscera Party" and "Jimi & Mary", not only attracts a lot of fans to drill down the implied meaning of the lyrics, but also admired by many music reviews. Released in 2016, Punk Floyd is the score year album. Those ten songs in it are ten chapters of the enraged statuses of the young Floyd. Lyrics of the single "Sun Chaser" discuss the situation of the social outsides, and the MV quote the famous words, "There is a crack in everything. That's how the light gets in." by Leonard Cohen to extend the artistic conception and arouse discussion in social medias.

Having almost more than 100 gigs per year till now, 88balaz have accumulated over 1000 live performing experiences. Striving in the indie music field, they well trained their live performing expressive power, and this is the reason why they can win the Best Live Performance award for two consecutive years of the Golden Indie Music Awards. Besides their furious performing style, this live-show-brilliant-than-album band always has special innovative ideas for the gigs. For example, for they all love to drink a little, they often write songs about drinking, and held unplugged concerts in many breweries around Taiwan. As B-movie lovers and frequently comparing B-movie spirits with their ideas about music, they held B Festival, a low ticket price but still full of innovations music festival, to rival the larger commercial ones.

Besides keeping on performing in Taiwan, 88balaz never forget to step into the world. Their "B Walkman" world tour during 2018-2019 covered many countries among Europe and Asia. This tour highlighted the B-class spirits they always keep in mind. To them, the B-class is never meant inferior, but the old fashion craftsmanship. They want to maintain the home-made or hand-made flavor in their music. This should be the main reason why 88balaz are welcome by their fans.