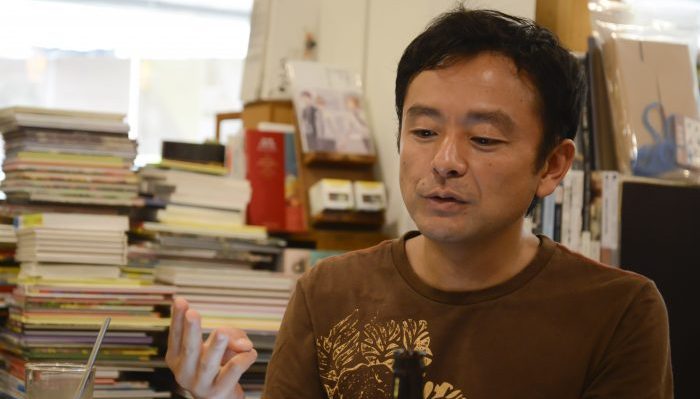 What Jazz and Taiwanese Hakka Folk Music Have in Common: Japanese Guitarist Ken Otake Talks About His Long-Term Collaboration with Lin Sheng Xiang A performance back in 2003 brought Ken Ohtake to Taiwan, later contributing to his long-term collaboratoin with folk musician Lin Sheng Xiang. Now most of his activities are in Taiwan. (Photo by Gin Tzeng)

Taiwan, the small island in Asia, has drawn abundant of outstanding foreign musicians to come and develop their music career, thanks to the multicultural environment and the yummy local food. The Japanese guitarist Ken Ohtake (大竹研) is one of them. His jazz band Tokyo Chuo-Line (東京中央線) just released the debut album One Line in Taiwan this May. It’s hard for people to imagine why such a jazz man’s well-known accomplishment in Taiwan, is being the guitarist of a folk outfit called Sheng Xiang Band (生祥樂隊). The band’s leader Lin Sheng Xiang (林生祥) is a famous Hakka singer-songwriter, having received more than five GMA awards, which is considered the equivalent to the Grammy Awards in Mandarin-speaking world. The word “Hakka” mentioned above indicates one of the Taiwanese ethnic groups, whose ancestors came from southeast China in the early days. Deeply rooted in Hakka culture, Sheng Xiang Band’s music often tries to call for a friendly environment for the minorities living in Taiwan.

As a Japanese, Ohtake was unfamiliar with Hakka culture and music. One of the reason why he could work well with Lin Sheng Xiang should be contributed to his past experience. Before coming to Taiwan, Ken had accompanied the legendary Okinawan three strings musician Takashi Hirayasu (平安隆) on guitar for four years. “The songs that Hirayasu played were folk music from long time ago. In the early time, Japanese music didn’t have any concept of chords. However, the guitar that I play is an instrument depending on chords. I learned the way to play the music and instruments that couldn’t be communicated through chords (like the Hakka music) from working with Hirayasu.” Besides, Ohtake and Lin also exchanged their knowledge of music, so they could efficiently understand each other’s logic on writing melodies. Ohtake recalled that while he first met Lin, Lin gave him a 10-CD package of traditional Hakka music and taught him the important elements in Hakka folk music. On the other hand, as a jazz-trained musician, Ohtake told Lin how to compose music in a Western way.

In addition to the concept of chords, there is still difference between the instruments used in Western and Hakka music. “The playing of erhu, the frequently used instrument in Hakka music, is not based on the theory of  scales, which means there could be boundless pitches between two adjacent notes,” Ohtake said. It makes him think of the jazz singer Sarah Vaughan. “While Sarah Vaughan was singing the scat part of 'Autumn Leaves', the pitches that she sang were between the notes, so they could not be found on the piano. Afterwards, when I listened to Hakka folk music, I discovered the same feature. I really like that kind of music.” As a result, Ohtake not only worked well with Lin and has been the guitarist in the Sheng Xiang Band for at least five albums. Due to Ohtake's musical preference, he has also devoted himself to the Hakka folk music for more than 10 years.

During the interview, while we talked about folk music, I could feel Ohtake’s passion in it. To know more about his opinion on that genre of music, I asked him “What is folk music to you?” He answered in a comfort pace, “Folk music is like rice and miso soup in Japan.” I couldn’t understand the meaning behind his metaphor at first, so he further explained, “Folk music was born from day-to-day life, such as the weather, language and the emotion in people’s mind and the difficulties in life. It is quite different from pop music. Pop music is more like a commodity while folk music is more like necessity.” Apart from Lin Sheng Xiang’s works, Ohtake also enjoys Taiwanese folk music by Sangpuy (桑布伊), Ilid Kaolo (以莉高露), Yu Jun Wang (王榆鈞), and Xie Ming You (謝銘祐). What folk music attracts him most are the natural feeling and the cultural meaning in it. Ken Ohtake: “Folk music is like rice and miso soup in Japan.” (Photo by Gin Tzeng)

In recent years, Ohtake focuses on improving his acoustic guitar playing skill and communicating with music in a more genuine way. He is now looking forward to collaborating with a Japanese erhu musician Chiki Sato (里地帰). In the end of October, they performed at the memorial of Taiwanese literature giant Ye Shih Tao (葉石濤). The songs they played were composed according to Ye’s literary works. But no matter Ohtake cooperates with Japanese or Taiwanese musicians and no matter he plays folk or jazz, the true emotion that he pours into the songs is the most significant mark of his music. Though Ohtake is used to wearing a hat while playing guitar on the stage, the smile and concentrated expression could never be hidden away.