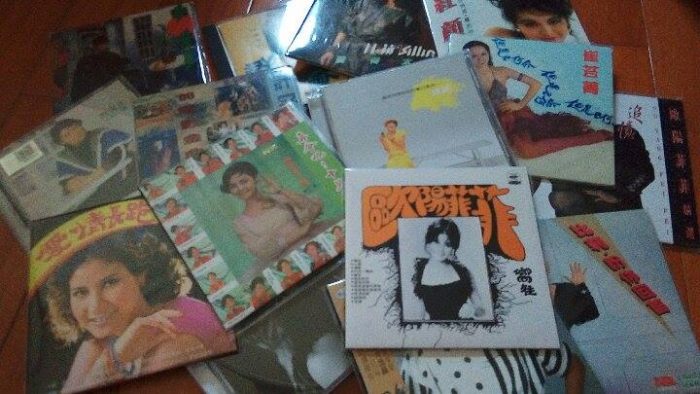 In the past, music critics often reviewed the Taiwanese and Mandarin pop songs based on compositions, the meaning of the lyrics, and vocal performances. In this article, I hope to review music like digging “rare groove” and go through a number of classic artists in the 60s to 80s and their masterpieces.

The development of Taiwan’s pop music industry began in the period of Japanese colonization (日治時期). Hugely influenced by Japan in its early stages, Taiwan’s pop music fused with then-popular jazz and was sung mainly in Taiwanese languages (Minnan or Hokkien). This kind of style became less popular in the 50s after World War II, when the KMT government advocated the National-Language Movement (國語運動).

After the breakout of Korean War in 1965, American pop music came to Taiwan along with the U.S. troops. U.S. military club sprang up all over Taiwan. The pop music in this period was in the style of American surf rock or traditional R&B. The solid base of U.S. military club culture then gave birth to the “hot music” (熱門音樂) culture developed since the 80s.

On the other hand, Taiwanese Campus Folk Movement (民歌運動) developed in the mid-to-late 70s with Taiwanese Nativist Literature Debate (鄉土文學論戰) and Taiwan Tang-wai (Non [KMT] Party) Movement (黨外運動). Inspired by the Civil Rights Movement (民權運動) in the United States, the singer-songwriters of the folk based campus music were all eager to “sing their own songs”(唱自己的歌). Li Shuangze (1949-1977) is the leading role in the movement of writing original songs instead of singing English covers.

The abolishment of the Martial Law in the late 80s had made the 90s become the most prosperous period of Taiwan’s music and recording industry. At that time, without the competition from China whose recording industry developed later, Taiwan dominated the Mandarin-speaking market. Taiwan’s music gained influences from pop music all over the world, and has gradually developed its own diversified and non-mainstream music (e.g. alternative music, electronic dance music, hip-hop, etc.).

Since the beginning of the millennium, the rise of China hugely impacted Taiwan’s music industry. Though the legacy we hold are still glorious, it is very obvious that the influence of Taiwan’s pop music has become less and less powerful than it used to be. Originally released in 1997, A-mei's sophomore album Bad Boy, is the best selling album of all time in the music history of Taiwan, having more than 1.3 million copies sold. (Photo via Musixmatch)

Around 1985, the British Jamaican DJ Norman Jay started to introduce various rare jazz, R&B, reggae, funk, early House, etc. in his underground radio show called “The Original Rare Groove Show” and had since coined the phrase “Rare Groove”. He influenced the first generation of Hip-Hop DJ in Europe, and with the promotion of his peer DJ Gilles Peterson, who’s also the mastermind of the record label Talkin’ Loud, rare groove culture has now been highly valued by music fans around the globe.

Taiwan’s knowledge of rare groove can be traced back to sometime around 2005. Vinyl records revived at the time when digital music became more and more accessible while CD experienced a huge decline in sales. Taiwanese DJs first gained the knowledge of rare groove during cultural exchanges with European and Japanese DJs. The main indie black music record stores such as Urban Soul and Da Project (with Soul Juice record store being the precursor of both) became pivotal places for black music DJs to exchange ideas and build connections. For instance, DJ Vicar, the founder of Soul Amazin’ Music, was then a fixture of the two aforementioned record stores. He put a lot of effort in promoting the crate digging culture of black music. As for Xiao Sung Records (小宋唱片), originally located at Ximending (now relocated in Dadaocheng), it is a must-visit place in Taiwan for foreign record collectors. It is highly reputable in the digger community for its Taiwanese second hand vinyl collections. As for the definition of “Taiwanese rare groove”, due to the careless master tape management Taiwanese labels had, complicated buyout transactions between labels and the publishing deal issues between labels and artists, a lot of hit and classic records are still unable to be reissued (like the early classics of the extremely talented singer-songwriter Lo Da Yu [羅大佑]). Given the reason mentioned above, while reviewing the so-called Taiwanese rare groove, we also need to include the pop music that has been gradually forgotten. We especially need to review the rhythm elements that were widely used but not taken seriously, such as the swinging drum beats, break, wah pedal, percussion instruments, soulful electric organ, the rarely seen bass slapping, etc.

1. Qing Shan (青山, born 1945) : The role model who started singing songs other than the Enka style Taiwanese songs and Mandarin Shidaiqu (時代曲) that originated in Shanghai.

Debuted in 1965, Qing Shan worked as a host and singer at Chengsheng Broadcasting Corp (正聲廣播電台). In 1968, he starred as a regular in the first singing variety show in Taiwan called “Qun Xing Hui (群星會, since 1962)”. Xie Lei (謝雷) and he were the most famous young male singers in Taiwan then. Under the instructions of Shen Zhi (慎芝), the producer of Qun Xing Hui, they got to collaborate with female singers like Wan Qu (婉曲) and Chang Chi (張琪). The base of postwar Taiwanese pop music was mainly made by these singers who differentiated their creations with the pop songs from Japan and Shanghai. They took pop music elements from genres in the 60s, like surf rock and soul, and created a new style of music full of rock and roll beats. One of his most noteworthy records is Songs of Qing Shan, Vol. 5 (青山之歌第五集), released in 1969. In this record, he covered the titular movie theme song of the 1967 film “King Drummer (青春鼓王)”.

The song I recommend is “King Drummer”, introduced by the drummer’s solo break. Rare groove collectors treasure every version of this song.

2. Yao Su-Yong (姚蘇蓉, born 1945): The Asian superstar who broke free from the autocracy.

She tried out in a singing competition held by Chengsheng Broadcasting Corp. in 1966. She won the first place and was elevated by Tony Wong (翁清溪) who later signed her to Haishan Records (海山唱片). By singing “Qiu Shui Yi Ren (秋水伊人, 1967)”, She is hailed as the “teary diva”. In fact, her hit songs “Fu Xin De Ren (負心的人, 1967)”, “Jin Tian Bu Hui Jia (今天不回家, 1969)”, and so on were banned during the period of Martial Law because they were accused of violating social consciousness and order when being reviewed by Government Information Office (新聞局). Therefore, she was also hailed as the “queen of banned songs (禁歌歌后)”. After her songs were banned, her singer’s license was revoked for reason of violating performance regulations as well. She then had no choice but to re-build her career in places outside of Taiwan, like Hong Kong and Malaysia. However, building a career outside of her hometown had accidentally made her become an international superstar in South East Asia.

The song I recommend is “Tou Xin De Ren (偷心的人)”, it was released in 1968. The band play in this record is called Telstar Combo, they were the exclusive session band of Haishan Records as well as important pushers of Taiwan’s pop music (especially the band leader, Wong Hsiao-Liang [翁孝良], who later successfully assisted Tom Chang (張雨生) and several artists made their debut) .

Made her breakout in a radio singing competition when she was only 11, Teresa Teng then signed to Yeu Jow Records (宇宙唱片) when she was 14 and then released her debut album The Modern Popular Songs of China: Feng Yang Hua Gu (鄧麗君之歌第一集：鳳陽花鼓) in 1967. She expanded her career to Japan in 1973. With her smash hit “Kuko (Airport; 空港)” , she won the Best New Artist at the Japan Record Awards which allowed her to build bigger career outside of Mandarin-speaking market and later became the Diva of Asia. In her early releases like her debut record Feng Yang Hua Gu, you’d be able to find a lot of unique Huangmei tone (黃梅調) arranged with Rock band breaks. Besides the above, the less popular ones such as the 1969 released album Songs of Teresa Teng, Vol.11: Zai Hui Ba Shi Qi Sui (鄧麗君之歌第十一集：再會吧！十七歲) had several songs with strong beats and rock and roll elements, like “Red Rose in Taipei (台北紅玫瑰)”, “King Drummer (青春鼓王)”, “Da Luo Da Gu (打鑼打鼓)”. Her vocal in the songs mentioned above was stronger and more powerful, comparing to the sweeter tone she developed while she was in Japan.

Born in Daxi (大溪), Fong had been singing in several bars in Taipei since 1967 until debuted in 1971. In 1972, she released her debut album Wish You Happiness (祝你幸福) under Haishan Records. In 1976, she started to host a regular variety show in fringe hours and even participated in program planning and production. She moved the film set to Luxury Hotel on Fushun Street (撫順街豪華酒店), and carefully planned the whole sets, props, dancers, bands, co-hosts and so on, making the new set look like a fancy nigh club. Fong Fei-Fei was best known for her friendly and tender songs. However, in her 1984 album Zhong Xia (仲夏), she collaborated with the then young singer-songwriters such as He Qi Hong (何啟弘), Johnny Chen (小蟲), and Angus Tung (童安格) on making songs with Disco and Synth Pop elements, like “Xia De Ji Jie (夏的季節)”, “Liang a Liang (涼啊涼)” and “Xia Yan (夏艷)”.

Let’s listen to the Johnny Chen-penned “Liang a Liang”, a rhythmic disco song arranged with the Caribbean percussion.

She was definitely the one and only disco diva of Taiwan. Her natural and outgoing personalities were very rare in East Asia. Ouyan Fei-Fei started as a resident singer in Central Hotel in 1966, and later expanded her career to Japan in 1971. She won the Best New Artist Award at the Japan Records Awards for her song “Ame No Midousuji (雨の御堂筋, 1971)”. She was also the first foreign artist to get on the stage of “Red and White Year-End Song Festival (NHK 紅白歌合戰)”, an NHK produced huge annual music show where she performed her song “Love Chase (恋の追跡, 1972)”. She had performed numerous songs written by the legendary songwriting duo Jun Hashimoto (橋本純) and Kyohei Tsutsumi (簡美京平). Taiwan’s Haishan Records had included numerous Ouyan Fei-Fei’s Mandarin covers such as “Re Qing De Sha Mo (熱情的沙漠, 1974)”, “Xiang Wang (嚮往, 1975)”, “Hei Hei Ji Cheng Che (嘿嘿計程車, 1977)”, “ Ai De Lu Shang Wo He Ni (愛的路上我和你, 1977)” and so on. Ouyang Fei-Fei even introduced Japanese group Tokyo D to Taiwan’s audience in the 90s, and brought in the mania of Japanese street dance.