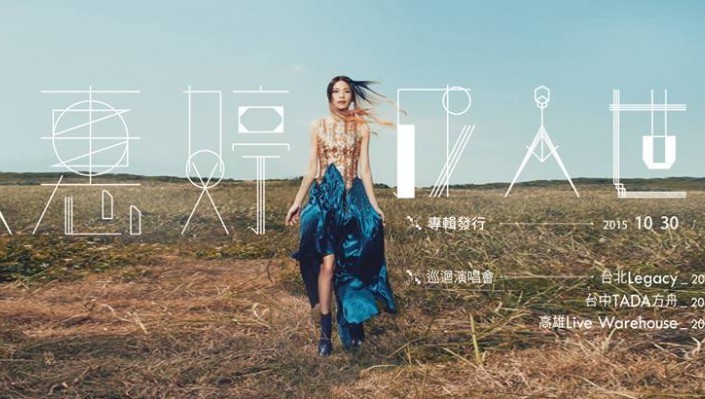 In her 15 years as a musician, Chen Huiting（陳惠婷） is best known as the vocalist of Tizzy Bac. Chen joined Sony Music when she went solo in 2013, released her solo album “21 Grams” （21克）in 2014 and won Best New Artist at the 26th Golden Melody Awards. In October 2015, Chen launched her second album “Adult World”（成人世界）, which features a heavier electro-pop influence.

When I first met Chen Huiting, she gave me the vibe of a cool girl who is stingy with her smiles and spoke like she sang. Yet within one meeting of our meeting, she had completely overturned my impressions of her. That Chen Huiting from Tizzy Bac, who has approached songwriting and singing with such sharp wit, whom fans have hailed as the “Queen Mother of Hipsters”, that’s the same Chen who recognized my Moomins?

“I’m usually just a normal person,” she said. “Even Peggy Hsu has mentioned that I’m just like the Ms. Chen who lives next door. My friends love the fact that I’ve this “rustic” side to me.” Chen is aware of the cool, slightly aloof image she projects as part of Tizzy Bac. Gender does not matter in rock bands, and Chen’s gender-neutral works and image have stuck with her for a long time. That was until the release of her first solo album “21 Grams”, into which she wrote about the thoughts and lamentations of women on love, something she rarely did back in the band.

To promote her new album Adult World this year, Chen started wearing hair extensions and couture clothing. Even hardcore hipsters have to be fashionable. “When I first started performing with the band, I really did not care about what I wore on stage, until I realized that fans were going online and commenting on how ugly my clothes were.” Realizing that dressing up is a part of the performance, Chen began researching fashion and flipping through magazines, just like any other girl. Before photo shoots, she would put in even more “prep” time, sometimes even seeking inspiration from America’s Next Top Model. “I’ll do my homework, but no guarantees about the results,” Chen said with cool smile on her face.

“I’m actually kind of a bumpkin in my private life, like an old lady. I actually go to anniversary sales events. At the hypermart, I often can’t help but peek at what people have in their shopping carts.” “Do you try the food samples?” I asked. “That’s a must! Why else would I pay the membership fees?” Chen’s friends find this adorable. She also mentioned how this contrast between her image and personality becomes an advantage when making new friends. “They would express their surprise at my actual personality. This contrast makes my friends like me even more. But with more contact, they would discover that I do have cold side to me as well. For instance, I can’t bring myself to have a Best Friends Forever friendship, the kind where you hold hands and go shopping together.”

Chen is a naturally shy person, and living in the moment is something that she feels the need to practice.

Shyness has always been part of personality. Chen changed kindergarten thrice as a kid, and she said she would always cry when she went, until the last one, but only because it was so far from home that crying would not help her get home earlier. “After I got home from the first day of student orientation at my high school, I told my dad that I didn’t want to go, simply because I’m scared of strangers,” said Chen. While she feels that she has made progress after growing up, Chen is still hesitant about taking the first step to make friends. “And that’s why I don’t have too many friends, but if someone is willing to become my friend, I would be extremely grateful toward him or her.”

In the new album “Adult World”, Chen did not retain the more “diversified” nature of her previous album which featured a range of musical styles. Instead, she chose to weave occultist and philosophical elements into electronic music to tell her stories. “I simply wrote through occultist and philosophical lenses, about topics we’re already familiar with. Creative work is still a straightforward thing, and I still write a lot purely about love.” Having just turned 38 this year, Chen is used to ruminating about the meaning of life, and “living in the moment” is something she wants to practice. “When I was young, I found myself burdened by the past, hindered by memories. I would spend every day thinking about my mistakes, which led to some Werther-like despair.” She spoke about her envy toward those youths who can live in the moment. “I feel that they are just naturally lucky, since this is something I need to practice.” The young Chen was impulsive and would get into get into wars of words with other bands when she was unhappy. Now that she is older, Chen says that she is no longer as emotional. A self-confessed “bore”, Chen said that she rarely even updates her Facebook page. “I don’t party. I just work, exercise, and meet up with friends occasionally. The last time I posted on Facebook was in July, I just ran out of things to say.” Not having to work means being able to stay at home, and she finds living with herself to be a comfortable and carefree experience.

Unlike the explosive tone of her singing voice, Chen’s speaking voice is somewhat more subdued. It was only when she talked about her first time on stage that she raised the pitch of her voice, but only ever so slightly. “Oh! I was terrified to be on stage alone. The first time was at Legacy for a countdown event two years back. For the whole two hours, I spent half on stage by myself, no other musician was on stage. I realized that I was even making mistakes on the keyboard. You see, during my band days, I could play without looking down, I was one with the performance. I wasn’t nervous about the audience’s response, or the performance, just the idea of standing along on stage.”

She said that she during her 15 years with Tizzy Bac, she felt safe being in a group. When by herself, without anyone playing alongside her, even breathing became difficult. This motivated her to attend body language classes, as she wanted learn how to feel safe and comfortable even without instruments or any accompanying band members. “I hope I can perform without relying on instruments. While this might be easy for most singers, who have no problems doing campus or kala events, it’s a challenge to me. I need to practice, else how would I respond if you take away my keyboard.”

Promotion for the new album has only just begun and Chen already has some ideas about her next album. She is candid about the creative bottlenecks she had encountered during her 15 years with Tizzy Bac. Some musical styles that Chen wanted to attempt did not fit well with the band’s own style, moreover each band member had his or her ideas for the future, and so it was decided that Tizzy Bac will go on a temporary hiatus. As to when the band would come together again, Chen shook her head gently. “I really don’t know. Some fans would occasionally ask on our fan page, about when the band will return,” she said. Chen still feels some pressure whenever she sees comments like this. “I’m not sure if they believe that the band went on a hiatus because of me going solo. But things aren’t so simple, the band isn’t just me, we’ve got to consider many factors. I would prefer to put this issue to the side on focus on promoting my new album.”