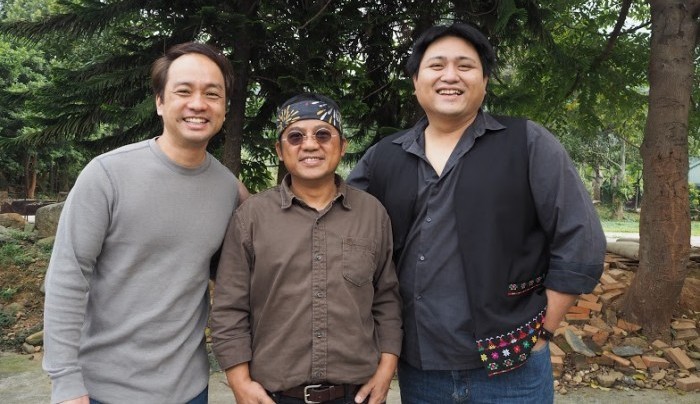 Interview with Hao-en／A Man Made Complete by Music（2） ◎If you hear Daniel and me singing outside the door, do open it for us.

The night of every December 31st serves as the setting for the album’s first song Open Door. Starting at 6pm, a group of aboriginal youths will visit families, knock on their doors and share their songs, the singing would last until 7am or 8am on the next day. Hao-en jokingly said, “I don’t think people could last this long when they sing at Holiday KTV?” Every family is waiting for them to sing this song in their living room, which symbolizes that the previous year has passed, and that everything bad and problematic has been chased away.

As the first song of the new album, Hao-en said that it represents not merely a ritual, but a hope that people can open up their hearts to more forms of music. “Does language create a gap? Yes. And how do we reconcile this with the idea that music has no borders? We know that music is borderless, but would you choose not to listen because you can’t understand the words? Yes, definitely yes, especially when it comes to aboriginal albums”, commented Hao-en on the harsh reality of the market. In a time when contemporary music styles are converging, how should we promote music in aboriginal languages to the world?

“What I want to express in Open Door is that we all share the same feelings about music in spite of language differences. So if you hear Daniel and me singing outside your door, please open it for us. Even though we’re extremely confident, this is a barrier that is difficult to overcome, particularly in Taiwan, which gives me more motivation to make this the album’s first song.” If a musician is earnest and sincere, he shows it clearly through his music and words.

◎Don’t be scared, you can lean on me

When he wrote this song, the one thought that Hao-en has long kept in his mind was this: “When will I grow up, and when can I be of help?”

Hao-en’s father passed away 11 years ago, at a time when he, by his own admission, was stuck in a limbo of sorts. Despite the elation of his Golden Melody win in 2007, Hao-en’s heart was still aching when he stepped on stage to receive the award. “My dad could not comprehend my reasons for making music. He wanted me to study and take over his place, and he always worried about me.” Having watched his father die and his mother growing frail, Hao-en realized the weight of his responsibilities. He expressed his regret about squandering his youth and failing to notice his parents growing old, much like the cloud mentioned in his song, ever moving and never stopping. “I really wish to grow up quickly, and have them look back and know that I’m here, that I can ease their fears and become someone they can lean on. This is my wish.”

“This song is in fact……well it’s hard to express……living with regret is tough.” Hao-en was calm when discussed the song, I was touched when he spoke about his parents and family. This is Hao-en’s music, music based on his experiences and feelings. You may not understand his words of songs, but you will surely feel the emotions and messages that they are trying to convey.

Hao-en has plenty of stories to share, and for those that he can’t fully express through words and language, music would be the chosen medium instead. As to when he will get to tell these stories, it would depend on opportunity and luck. Legends of Passage’s completion is to Hao-en a combination of such opportunity and luck. Through Wind Music, he was able to work with Daniel to complete this album, an album of international quality. And when he met the man behind the album’s visual design, Hao-en found out that he was his long-time friend, Etan Pavavalung,

“I fully appreciate my age. “Being no longer young” has become a new source of motivation for me. Even if I’m not sure about the right things to do, I want to at least avoid going down the wrong paths.” Having dealt with family issues, career changes, marriage, and album making, today’s Hao-en is more relaxed and purely uses music to express the words in his heart.

“It’s like I’ve just woken up, to a more open-minded way of life.” The Hao-en I know is sometimes pensive, sometimes humorous, and the most authentic Hao-en can be found in his album Legends of Passage.